Prime Minister of the United Kingdom facts for kids 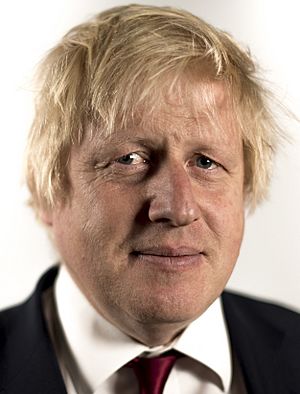 Boris Johnson was selected for office by an election of the 160,000 members of the UK's Conservative and Unionist Party and winning against his rival Jeremy Hunt.

The Prime Minister is normally but not necessarily the leader of the political party which wins most seats after a general election - of which 650 are avaliable over the United Kingdom. Voters vote for their own local MP, not for the Prime Minister.

The first Prime Minister was Robert Walpole in the eighteenth century, but he was known as the First Lord of the Treasury. The first person to be officially called "Prime Minister" was Sir Henry Campbell-Bannerman in 1905.

Other well-known prime ministers include Neville Chamberlain, Winston Churchill, Margaret Thatcher and Tony Blair. The Prime Ministers live and work at No.10 Downing Street or their country retreat Chequers House while in office.

All content from Kiddle encyclopedia articles (including the article images and facts) can be freely used under Attribution-ShareAlike license, unless stated otherwise. Cite this article:
Prime Minister of the United Kingdom Facts for Kids. Kiddle Encyclopedia.