Royal coat of arms of the United Kingdom facts for kids

The royal coat of arms of the United Kingdom, or the Royal Arms for short, is the official coat of arms of the British monarch, currently Queen Elizabeth II. These arms are used by the Queen in her official capacity as monarch of the United Kingdom. Variants of the Royal Arms are used by other members of the British royal family; and by the British government in connection with the administration and government of the country. In Scotland, there exists a separate version of the Royal Arms, a variant of which is used by the Scotland Office.

In the standard variant used outside of Scotland, the shield is quartered, depicting in the first and fourth quarters the three passant guardant lions of England; in the second, the rampant lion and double tressure flory-counterflory of Scotland; and in the third, a harp for Ireland. The crest is a statant guardant lion wearing the St Edward's Crown, himself on another representation of that crown. The dexter supporter is a likewise crowned English lion; the sinister, a Scottish unicorn. According to legend a free unicorn was considered a very dangerous beast; therefore the heraldic unicorn is chained, as were both supporting unicorns in the royal coat of arms of Scotland. In the greenery below, a thistle, Tudor rose and shamrock are depicted, representing Scotland, England and Ireland respectively. This armorial achievement comprises the motto of English monarchs, Dieu et mon Droit (God and my Right), which has descended to the present royal family as well as the Garter circlet which surrounds the shield, inscribed with the Order's motto, Honi soit qui mal y pense (Shame on he who thinks evil). The official blazon of the Royal Arms is:

Quarterly, first and fourth Gules three Lions passant gardant in pale Or armed and langued Azure (for England), second quarter Or a Lion rampant within a double tressure flory-counter-flory Gules (for Scotland), third quarter Azure a Harp Or stringed Argent (for Ireland), the whole surrounded by the Garter; for a Crest, upon the Royal helm the Imperial Crown Proper, thereon a Lion statant gardant Or imperially crowned Proper; Mantling Or and Ermine; for Supporters, dexter a Lion rampant gardant Or crowned as the Crest, sinister a Unicorn Argent armed, crined and unguled Proper, gorged with a Coronet Or composed of Crosses patées and Fleurs-de-lis a Chain affixed thereto passing between the forelegs and reflexed over the back also Or. Motto "Dieu et mon Droit" in the compartment below the shield, with the Union Rose, Shamrock and Thistle engrafted on the same stem. 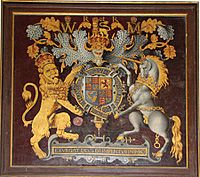 The Royal Arms as shown above may only be used by the Queen herself. They also appear in courtrooms, since the monarch is deemed to be the fount of judicial authority in the United Kingdom and law courts comprise part of the ancient royal court (thus so named). Judges are officially Crown representatives, demonstrated by the display of the Royal Arms behind the judge's bench in all UK courts (with the exceptions of the magistrates' court in the City of London, where behind the Justices of the Peace stands a sword upright flanked by the arms of the City and the Crown). In Northern Ireland, the Royal Arms cannot be displayed in courtrooms or on court-house exteriors. There are a few exceptions, with the Royal Arms allowed to be displayed in the courtrooms of the Royal Courts of Justice in Belfast and the courts in Armagh, Banbridge, Downpatrick, Magherafelt, or Omagh. They may be shown on the exterior of court buildings that had them in place prior to the 2002 law.

As the United Kingdom is governed in the monarch's name, the British Government also uses the Royal Arms as a national symbol of the United Kingdom, and, in that capacity, the coat of arms can be seen on several government documents and forms, passports, in the entrance to embassies and consulates, etc. However, when used by the government and not by the monarch personally, the coat of arms is often represented without the helm. This is also the case with the sovereign's Scottish arms, a version of which is used by the Scotland Office.

The monarch grant Royal Warrants to select businesses and tradespeople which supply the Royal Household with goods or services. This entitles those business to display the Royal Arms on their packaging and stationery by way of advertising.

It is customary (but not mandatory) for churches throughout the United Kingdom whether in the Church of England or the Church of Scotland to display the Royal Arms to show loyalty to the Crown.

The widely sold British newspaper The Times uses the Hanoverian Royal Arms as a logo, whereas its sister publication, The Sunday Times, displays the current Royal Arms.

The Royal Arms are also displayed in all courts in British Columbia, as well as in other Canadian provinces such as Ontario, where the judges are appointed by Crown authority.

The Royal Arms were also displayed by all Viceroys of Australia as representation of their Crown authority. 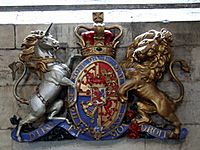 At St Michael's Parish Church, Linlithgow, Scotland: a Scottish version of the royal arms of the Hanoverians as used from 1801 to 1816.

Since the Union of the Crowns in 1603, a separate version of the Royal Arms has been used in Scotland, giving the Scottish elements pride of place.

The shield is quartered, depicting in the first and fourth quarters the lion rampant of Scotland; in the second, the three lions passant guardant of England; and in the third, the harp of Ireland.

The coat also features both the motto Nemo me impune lacessit (No one wounds (touches) me with impunity) and, surrounding the shield, the collar of the Order of the Thistle. On the compartment are a number of thistles, Scotland's national flower. 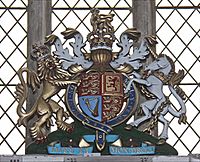 The current version of the Royal Arms, displayed in the parish church of Stone, Kent.

Unlike the Acts of Union 1707 with Scotland, the Acts of Union 1800 with Ireland did not provide for a separate Irish version of the royal arms. The crest of the Kingdom of Ireland (on a wreath Or and Azure, a tower triple-towered of the First, from the portal a hart springing Argent attired and unguled Or) has had little or no official use since the union. When the Irish Free State established its own seals in the 1930s, the "Fob Seal" used on letters of credence varied the British arms by having the harp in two quarters.

The harp quarter of the Royal Arms represents Ireland on both the English and Scottish versions. Likewise, one English quarter is retained in the Scottish version, and one Scottish quarter is retained in the English version. Thus, England, Scotland and Ireland are represented in all versions of the Royal Arms since they came under one monarch. By contrast, there is no representation at all for Wales in the Royal Arms, as at the Act of Union 1707 Wales was an integral part of the Kingdom of England pursuant to the Laws in Wales Acts 1535 and 1542; thus, it can be argued Wales is represented in the English coat of arms. Wales was a kingdom when ruled by native kings, some of whom united it under one Crown, but with the English conquest it largely ceased to exist as a distinct legal entity. The Prince of Wales has ever since been the monarch's heir apparent.

Upon the accession of the Tudor monarchs, who were themselves of Welsh descent, a Welsh Dragon was used as a supporter on the Royal Arms. This was dropped by their successors, the Scottish House of Stuart, who replaced the Tudors' dragon supporter with the Scottish unicorn.

In the 20th century, the arms of the principality of Wales were added as an inescutcheon to the coat of arms of the Prince of Wales, and a banner of those arms with a green inescutcheon bearing the prince's crown is flown as his personal standard in Wales. The so-called Prince of Wales's feathers are a heraldic badge rather than a coat of arms upon a shield, but they are not Welsh in any case. They derive, in fact, from the English Princes of Wales (who may owe them to an exploit of Edward, the Black Prince at the Battle of Crécy) and carry the motto Ich dien (German, "I Serve"). In any event, they do not form part of the Royal Arms, as opposed to the heraldic achievement of the Prince of Wales, who drops them upon his accession as King.

Kingdoms of England and Scotland

The current Royal Arms are a combination of the arms of the former kingdoms that make up the United Kingdom, and can be traced back to the first arms of the Kings of England and Kings of Scots. Various alterations occurred over the years as the arms of other realms acquired or claimed by the Kings were added to the Royal Arms. The table below tracks the changes in the Royal Arms from the original arms of King Richard I of England, and William I, King of Scots.

Union of the Crowns and the Commonwealth

Members of the British royal family are granted their own personal arms which are based on the Royal Arms. Only children and grandchildren in the male line of the monarch are entitled to arms in this fashion : the arms of children of the monarch are differenced with a three-point label; grandchildren of the monarch are differenced with a five-point label. An exception is made for the eldest son of the Prince of Wales, who bears a three-point label. Since 1911, the arms of the Prince of Wales also displays an inescutcheon of the ancient arms of the Principality of Wales. Queens consort and the wives of sons of the monarch also have their own personal coat of arms. Typically this will be the arms of their husband impaled with their own personal arms or those of their father, if armigerous. However, the consorts of a Queen regnant are not entitled to use the Royal Arms. Thus Prince Philip, Duke of Edinburgh has been granted his own personal arms.

Currently the following members of the royal family have their own arms based on the Royal Arms:

The version used by the British Government.

The version used by the Scotland Office.

A version used by the British Government on official websites and departmental insignia.

HM Government generally uses simplified version of the Royal Arms with a crown replacing the helm and crest, and with no compartment. In relation to Scotland, the Scotland Office and the Advocate General for Scotland use the Scottish version, again without the helm or crest, and the same was used as the day-to-day logo of the Scottish Executive until September 2007, when a rebranding exercise introduced the name Scottish Government, together with a revised logo incorporating the flag of Scotland.

The Scottish Government continues to use the Arms on some official documents.

Various courts in the Commonwealth also continue to use the Royal Arms:

This table breaks down the official blazons to enable comparison of the differences between the general coat and the coat used in Scotland.

All content from Kiddle encyclopedia articles (including the article images and facts) can be freely used under Attribution-ShareAlike license, unless stated otherwise. Cite this article:
Royal coat of arms of the United Kingdom Facts for Kids. Kiddle Encyclopedia.