A Royal Badge for Wales was approved in May 2008. It is based on the arms borne by the thirteenth-century Welsh prince Llywelyn the Great (blazoned quarterly Or and gules, four lions passant guardant counterchanged), with the addition of St Edward's Crown atop a continuous scroll which, together with a wreath consisting of the plant emblems of the four countries of the United Kingdom, surrounds the shield. The motto which appears on the scroll, PLEIDIOL WYF I'M GWLAD ("I am true to my country"), is taken from the National Anthem of Wales and is also found on the Welsh designs for £1 coins minted from 1985 until 2000. The badge formerly appeared on the covers of Assembly Measures; since the 2011 referendum, it now appears on the cover of Acts passed by the Senedd and its escutcheon, ribbon and motto are depicted on the Welsh Seal.

The current badge follows in a long line of heraldic devices representing Wales. Its predecessors have all been variations on either the Red Dragon, an ancient emblem revived by Henry VII, or the arms of Llywelyn. Whereas the arms of England, Scotland and Ireland are represented in the Royal Arms of the United Kingdom, Wales has no such representation due to its having been annexed and incorporated into the Kingdom of England; therefore Wales had no status as a nation within the Kingdom of England, and the succeeding United Kingdom. The badge has been referenced as a coat of arms for Wales with its use by the Welsh Parliament in acts and laws.

Coat of arms of Llywelyn the Great 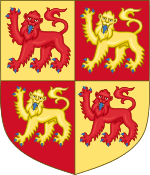 Coat of arms of Llywelyn

Before the Norman conquest, Wales was ruled by a number of kings and princes, whose dominions shifted and sometimes merged following the vagaries of war, marriage and inheritance. All these kings and princes were ascribed personal coats of arms, often retrospectively if they lived before the dawn of heraldry, and these were borne by their descendants in Wales. The two principal Welsh kingdoms were those of Gwynedd, in the north, and Deheubarth in the south. Of these, the more successful, and the last, finally, to fall, was that of Gwynedd, and the arms now borne by the Princes of Wales as an inescutcheon since 1910 are the historic arms of the dynasty of Gwynedd as borne by the last native Princes of Wales, including Llywelyn the Great and Llywelyn ap Gruffudd. These arms have the blazon Quarterly Or and Gules, four lions passant guardant counterchanged, armed and langued Azur. 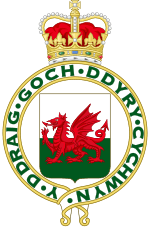 A royal heraldic badge for Wales has been used since the reign of Henry VII, which is: On a mount Vert a dragon passant with wings elevated Gules. In 1953 the badge was given an augmentation of honour. The augmented badge is blazoned: Within a circular riband Argent fimbriated Or bearing the motto Y DDRAIG GOCH DDYRY CYCHWYN ["the red dragon inspires action"], in letters Vert, and ensigned with a representation of the Crown proper, an escutcheon per fesse Argent and Vert and thereon the Red Dragon passant. Winston Churchill, the prime minister at the time, detested the badge's design, as is revealed in the following Cabinet minute from 1953:

In 1956 this badge was added to the arms of the Welsh capital city Cardiff by placing it on collars around the necks of the two supporters of the shield. The badge was the basis of a flag of Wales in which it was placed on a background divided horizontally with the top half white and bottom half green. In 1959 Government use of this flag was dropped in favour of the current flag at the urging of the Gorsedd of Bards.

The badge was used by the Wales Office until January 2017. It was printed on Statutory Instruments made by the National Assembly for Wales and was used in the corporate logo of the Assembly until the "dynamic dragon" logo was adopted.

There is a further badge for Wales, belonging to the Princes of Wales since 1901, of the red dragon on a mount but with a label of three points Argent about the shoulder to difference it from the monarch's badge. (A similar label of three points is used in his arms, crest and supporters for the same reason.)

Use of the arms of Llywelyn for Wales

When in 1911 the future King Edward VIII was made Prince of Wales, a warrant exemplifying his arms was issued. Along with the usual royal arms differenced by a "label" of three points, his main arms included an "inescutcheon surtout" crowned with the heir apparent's coronet and containing the arms of Llywelyn of Gwynedd to represent the principality of Wales.

It is unclear whether, before this date, they were thought of as the "arms of Wales" or simply as the "arms of Llywelyn". But they had certainly not previously been used by heirs to the English or British thrones; indeed, in his 1909 book A Complete Guide to Heraldry, Arthur Charles Fox-Davies had written: "It is much to be regretted that the arms of HRH The Prince of Wales do not include...any allusion to his dignities of Prince of Wales or Earl of Chester." The only allusion, before this innovation, to Wales in the royal arms had been the inclusion, among many other badges, of on a mount vert a dragon rouge – the royal badge on which the present flag of Wales is based.

In the 1960s, A banner of the principality's arms, defaced with an inescutcheon of his heraldic coronet, was introduced for the Prince of Wales's use in Wales.

In 2007 the Presiding Officer of the National Assembly for Wales entered into discussions with the Prince of Wales and the College of Arms regarding a grant of arms for official use by the assembly. A new royal badge designed by the Garter King of Arms, Peter Gwynne-Jones, was granted in 2008 based on the arms of Llywelyn.

All content from Kiddle encyclopedia articles (including the article images and facts) can be freely used under Attribution-ShareAlike license, unless stated otherwise. Cite this article:
Royal Badge of Wales Facts for Kids. Kiddle Encyclopedia.