Leek is a vegetable. It belongs to the genus Allium. This is the same genus as the onion and garlic. It can be used for cooking. It is similar to the Chinese onion but it is bigger in size.

Leeks are easy to grow from seed and tolerate standing in the field for an extended harvest, which takes place up to 6 months from planting. The soil in which it is grown has to be loose and drained well; leek can be grown in the same regions where onions can be grown. Leeks usually reach maturity in the autumn months. Leeks can be bunched and harvested early when they are about the size of a finger or pencil, or they can be thinned and allowed to grow to a much larger mature size. Hilling leeks can produce better specimens. 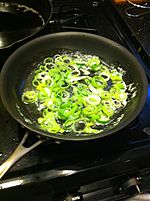 Leeks have a mild, onion-like taste. In its raw state, the vegetable is crunchy and firm. The edible portions of the leek are the white base of the leaves (above the roots and stem base), the light green parts, and to a lesser extent the dark green parts of the leaves. The dark green portion is usually discarded because it has a tough texture, but it can be sautéed, or more commonly added to stock for flavor. A few leaves are sometimes tied with twine and other herbs to form a bouquet garni.

Leeks are typically chopped into slices 5–10 mm thick. The slices have a tendency to fall apart, due to the layered structure of the leek. The different ways of preparing the vegetable are:

Leeks are an ingredient of cock-a-leekie soup, leek and potato soup, and vichyssoise, as well as plain leek soup.

Because of their symbolism in Wales (see below), they have come to be used extensively in that country’s cuisine. Elsewhere in Britain, leeks have come back into favor only in the last 50 years or so, having been overlooked for several centuries.

The Hebrew Bible talks of חציר, identified by commentators as leek, and says it is abundant in Egypt. Dried specimens from archaeological sites in ancient Egypt, as well as wall carvings and drawings, indicate that the leek was a part of the Egyptian diet from at least the second millennium BCE. Texts also show that it was grown in Mesopotamia from the beginning of the second millennium BCE. The leek was the favorite vegetable of the Emperor Nero, who consumed it in soup or in oil, believing it beneficial to the quality of his voice. 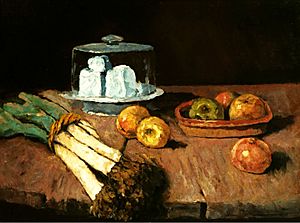 The leek is one of the national emblems of Wales, worn along with the daffodil (in Welsh, the daffodil is known as "Peter's leek", Cenhinen Bedr) on St. David's Day. According to one legend, King Cadwaladr of Gwynedd ordered his soldiers to identify themselves by wearing the vegetable on their helmets in an ancient battle against the Saxons that took place in a leek field. The Elizabethan poet Michael Drayton stated, in contrast, that the tradition was a tribute to Saint David, who ate only leeks when he was fasting. Whatever the case, the leek has been known to be a symbol of Wales for a long time; Shakespeare, for example, refers to the custom of wearing a leek as an “ancient tradition” in Henry V. In the play, Henry tells the Welsh officer Fluellen that he, too, is wearing a leek “for I am Welsh, you know, good countryman.” The 1985 and 1990 British one pound coins bear the design of a leek in a coronet, representing Wales.

Alongside the other national floral emblems of countries currently and formerly in the Commonwealth or part of the United Kingdom (including the English Tudor Rose, Scottish thistle, Irish shamrock, Canadian maple leaf, and Indian lotus), the Welsh leek appeared on the coronation gown of Elizabeth II. It was designed by Norman Hartnell; when Hartnell asked if he could exchange the leek for the more aesthetically pleasing Welsh daffodil, he was told no.

Perhaps the most visible use of the leek, however, is as the cap badge of the Welsh Guards, a regiment within the Household Division of the British Army.

In Romania, the leek is also widely considered a symbol of Oltenia, a historical region in the southwestern part of the country. In early 1990s Albania, protestors waved leeks in defiance of the Communists whose policies had virtually reduced many to this staple.

All content from Kiddle encyclopedia articles (including the article images and facts) can be freely used under Attribution-ShareAlike license, unless stated otherwise. Cite this article:
Leek Facts for Kids. Kiddle Encyclopedia.