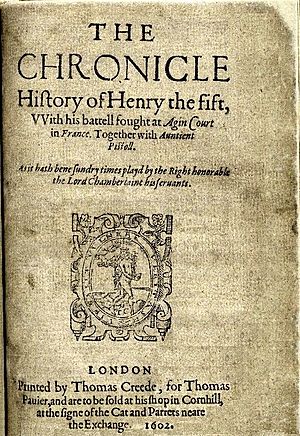 Title page of the second quarto, 1602

Henry V is a play by William Shakespeare. It is called a history play. Shakespeare's source was The Chronicles of England, Scotland and Ireland by Raphael Holinshed. The play was probably first acted between 1598 and 1599. It was first printed in 1600. Laurence Olivier and Kenneth Branaugh have both made movies of the play.

All content from Kiddle encyclopedia articles (including the article images and facts) can be freely used under Attribution-ShareAlike license, unless stated otherwise. Cite this article:
Henry V (play) Facts for Kids. Kiddle Encyclopedia.