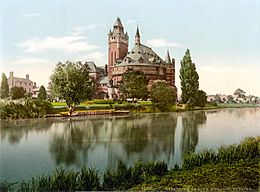 William Shakespeare (26 April 1564 (baptised) – 23 April 1616) was an English author who wrote 37 plays and also two long poems in his lifetime. He lived in Stratford-upon-Avon, in Warwickshire, England. His plays are still performed today. He is often quoted in modern writing.

By 1594 he was an actor in The Chamberlain's Men acting company.

His plays are of different kinds, or genres. There are histories, tragedies and comedies. These plays are among the best known in English literature and are studied in schools around the world. Shakespeare wrote his works between about 1590 and 1613.

Shakespeare has been credited for adding new words and phrases to the English language and for making some words more popular. He created over 1,700 English words. 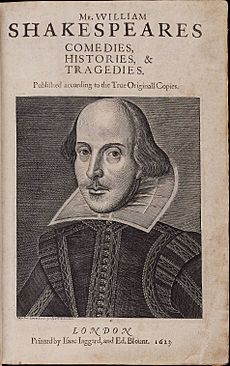 Title page of the First Folio, 1623. Copper engraving of Shakespeare by Martin Droeshout.

He married Anne Hathaway, a woman eight years older than he was. He had three children, Susanna (married John Hall), Hamnet Shakespeare (died at the age of 11 due to unknown reasons) and Judith (married Thomas Quiney). By 1592 he had become an actor and was becoming well known as a writer of plays. At the time of his death in 1616, only some of his plays had been published in single editions. The plays were collected and published in 1623, seven years after he died. There is proof that people in Shakespeare's time thought highly of him. After his death, even his rival Ben Jonson said,

"Triumph, my Britain, thou hast one to show,
To whom all scenes of Europe homage owe.
He was not of an age, but for all time!"

He was involved in the building of the Globe Theatre in 1599. Which is still used today for his plays.

All content from Kiddle encyclopedia articles (including the article images and facts) can be freely used under Attribution-ShareAlike license, unless stated otherwise. Cite this article:
William Shakespeare Facts for Kids. Kiddle Encyclopedia.