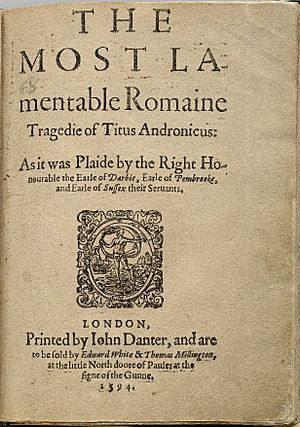 Titus Andronicus (c. 1589–1592) is the first tragedy play by William Shakespeare. Most of its theme, structure and language comes from The Spanish Tragedy by Thomas Kyd. It is believed to be Shakespeare's first play, and also the most bloodiest and less respected of his works.

All content from Kiddle encyclopedia articles (including the article images and facts) can be freely used under Attribution-ShareAlike license, unless stated otherwise. Cite this article:
Titus Andronicus Facts for Kids. Kiddle Encyclopedia.