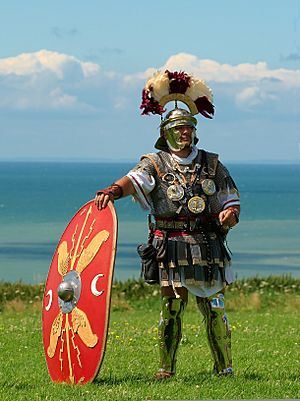 A historical reenactor in Roman centurion costume. Note the transverse crest on the Galea (helmet). It was worn to indicate the wearer's rank in regimental 'triumph' and honorific parades. Its purpose was purely symbolic. It was not part of the standard battle-dress of Roman soldiers in the field.

A centurion ( Latin: centurio, pl. Latin: centuriones; Greek: κεντυρίων kentyríōn, or Greek: ἑκατόνταρχος hekatóntarkhos) was a position in the Roman army during Classical Antiquity, nominally the commander of a century (Latin: centuria), a military unit of around 80 legionaries. In a Roman legion, centuries were grouped into cohorts commanded by their senior-most centurion. The prestigious 1st cohort was led by the primus pilus, the most senior centurion in the legion and its third-in-command.

A centurion's symbol of office was the vine staff, with which they disciplined even Roman citizens, who were otherwise legally protected from corporal punishment by the Porcian Laws. Centurions also served in the Roman navy. After the 107 BC Marian reforms of Gaius Marius, centurions were professional officers. In Late Antiquity and the Middle Ages, the Byzantine army's centurions were also known by the name kentarch (Greek: κένταρχος kentarchos).

The qualities necessary to be a centurion

The centurion in the infantry is chosen for his size, strength and dexterity in throwing his missile weapons and for his skill in the use of his sword and shield; in short for his expertness in all the exercises. He is to be vigilant, temperate, active and readier to execute the orders he receives than to talk; Strict in exercising and keeping up proper discipline among his soldiers, in obliging them to appear clean and well-dressed and to have their weapons constantly rubbed and bright.

All content from Kiddle encyclopedia articles (including the article images and facts) can be freely used under Attribution-ShareAlike license, unless stated otherwise. Cite this article:
Centurion Facts for Kids. Kiddle Encyclopedia.