The Roman army is the military of ancient Rome, the forces used by the Roman Kingdom, Roman Republic and later Roman Empire. Its infantry for much of its history, was the Roman legion. Rome also had a navy. The size of the army in the late Roman Empire was about 128,000 – 179,200 men. It was very well organized. The main Roman soldiers in the Empire were the legionaries. The legions were separated into centuries, made up of 80 soldiers and 20 other men who remained in the camp to cook and do other chores.

Other soldiers in the army were called the auxilia. Auxilia were non-citizens who mainly came from the provinces. They were paid less than legionaries and did not usually wear armor but at the end of their service, which was a minimum of 25 years, they were given Roman citizenship.

The army had cavalry units called Equites. Their men were rich enough to have horses and more expensive weapons. Being few, they were less important in battle than the infantry. 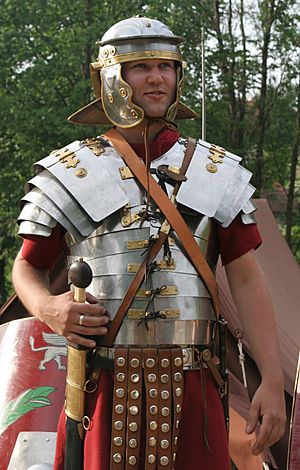 The soldiers of the Roman army wore helmets and body protection. In the early to mid-Republican era, legionaries usually bought their own equipment. Hastati, the first line of soldiers, usually had breastplates, called a cuirass, and some wore lorica hamata, or chainmail. The richer principes, the second line of soldiers, could afford lorica hamata but they were sometimes seen wearing the cheaper cuirasses. Both hastati and principes were each armed with a gladius - a short, 60 centimeter (two foot) sword - and each had two pila - short spears.

The third line of soldiers, the Triarii, had a hasta, a two meter long spear. They were also armed with the gladius and had an early form of the lorica segmenta or iron band armor. All legionaries had a large rectangular shield, the scutum, which had rounded corners. By the late Republican period, all legionaries carried a gladius, two pila, a new, larger scutum, and wore chainmail. Lorica segmentata was only commonly worn between the 2nd and 3rd century.

Larger weapons such as the ballista (large crossbow) and the Onager (catapult) were used in larger battles.

The main thing a member of the Roman Army needed was physical fitness. Soldiers were expected to march about 36 km (24 miles) in five hours. They also had to be fit to be able to fight well and cope with any injuries.

New soldiers would do two sessions of military drill and give their oath of loyalty to their Commander and Emperor. Every day the whole of the legion would practice running, jumping, sword fighting and javelin throwing.

All content from Kiddle encyclopedia articles (including the article images and facts) can be freely used under Attribution-ShareAlike license, unless stated otherwise. Cite this article:
Roman army Facts for Kids. Kiddle Encyclopedia.