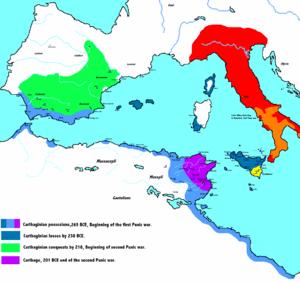 Empire of Carthage through the Punic Wars

The Punic Wars were a series of conflicts fought between Rome and Carthage between 264 and 146 BC. They were probably the largest wars in the ancient world. The term "Punic" comes from the Latin word Punicus (or Poenicus). This was the word the Romans used for the Carthaginians, due to their Phoenician ancestry.

The main cause of the Punic Wars was the clash of interests between the existing empire of Carthage and the expanding Roman Republic. What was at stake was control of the trading around the Mediterranean sea. Carthage lost the three wars.

Carthage was a trading nation founded by Phoenicians. It was the dominant sea power in the western Mediterranean. It was a maritime empire, in contrast to the land-based Roman empire. The Romans decided they needed Sicily, which was then in Carthaginian hands. The consequence was a series of wars which lasted over a hundred years, and ended in the utter destruction of Carthage.

All content from Kiddle encyclopedia articles (including the article images and facts) can be freely used under Attribution-ShareAlike license, unless stated otherwise. Cite this article:
Punic Wars Facts for Kids. Kiddle Encyclopedia.