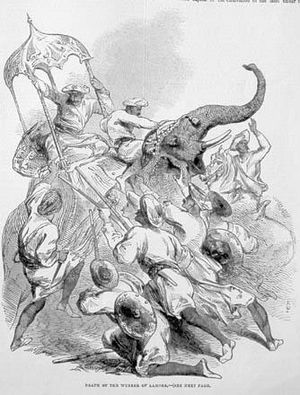 A war elephant is an elephant that was trained for battle. Elephants were guided by people. The main use of the elephant was to trample the enemies, and to break their lines. They were first used in India, but their use spread to other regions. Pyrrhus of Epirus used many of them, and so did the armies of Carthage. Hannibal crossed the Alps with a number of war elephants and marched against Rome.

In the west, military tactics soon changed, and reduced the value of a war elephant. It was the use of cannons that made the war elephant useless in the 19th century. After that, elephants continued to be used for construction work.

All content from Kiddle encyclopedia articles (including the article images and facts) can be freely used under Attribution-ShareAlike license, unless stated otherwise. Cite this article:
War elephant Facts for Kids. Kiddle Encyclopedia.