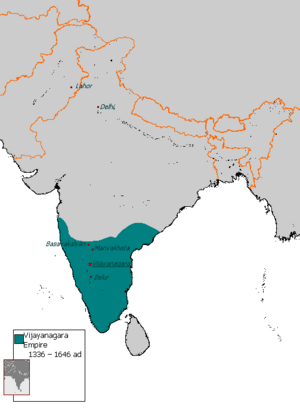 The Vijayanagara empire was an Indian empire. From 1336 and afterwards, it was in the Deccan, in the peninsula and in southern India. It was founded by Harihara (Hakka) and his brother Bukka Raya. The empire is named after its capital city Vijayanagara, now Hampi in modern Karnataka, India. It began in 1336 and ended in 1660, though in its last century it began losing its power. Stories of the empire's creation and history are not certain, though tales of the empire's wealth and power were described by European travellers such as the Portuguese travelers Domingo Paes and Nuniz, and the Venetian traveler Niccolò Da Conti.

This list is based on the book by Robert Sewell (A Forgotten Empire).

Aravidu (dates are not known), includes these rulers. There is certainly more than one ruler under each name.

All content from Kiddle encyclopedia articles (including the article images and facts) can be freely used under Attribution-ShareAlike license, unless stated otherwise. Cite this article:
Vijayanagara Empire Facts for Kids. Kiddle Encyclopedia.