Battle of Zama facts for kids 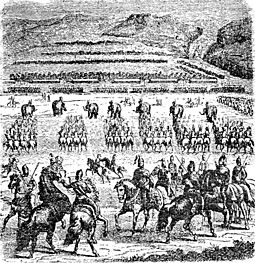 Zama was a battle in Carthage around 19 October 202 BC. There were elephants as well as ground infantry. Scipio Africanus won. Hannibal lost. It was the last battle in the Second Punic War.

All content from Kiddle encyclopedia articles (including the article images and facts) can be freely used under Attribution-ShareAlike license, unless stated otherwise. Cite this article:
Battle of Zama Facts for Kids. Kiddle Encyclopedia.