Charlotte Mary Yonge (1823–1901) was an English novelist who wrote to the service of the church. Her books helped to spread the influence of the Oxford Movement. Her books showed her keen interest in matters of public health and sanitation. Her abundant work is mostly out of print.

Charlotte Mary Yonge was born in Otterbourne, Hampshire, England, on 11 August 1823 to William Yonge and Fanny Yonge, née Bargus. She was educated at home by her father, studying Latin, Greek, French, Euclid, and algebra. Her father's lessons could be harsh:

He required a diligence and accuracy that were utterly alien to me. He thundered at me so that nobody could bear to hear it, and often reduced me to tears, but his approbation was so delightful that it was a delicious stimulus... I believe, in spite of all breezes over my innate slovenliness, it would have broken our hearts to leave off working together. And we went on till I was some years past twenty.

Yonge's devotion to her father was lifelong and her relationship with him seems to have been for her the standard for all other relationships, including marriage. His "approbation was throughout life my bliss; his anger my misery for the time."

She was born into a religious family background, was devoted to the High Church, and much influenced by John Keble, Vicar of Hursley from 1835, a near neighbour and one of the leaders of the Oxford Movement. Yonge is herself sometimes referred to as "the novelist of the Oxford Movement", as her novels frequently reflect the values and concerns of Anglo-Catholicism. She remained in Otterbourne all her life and for 71 years was a teacher in the village Sunday school. She lived in a house called Elderfield (which became a grade 2 listed building in 1984). 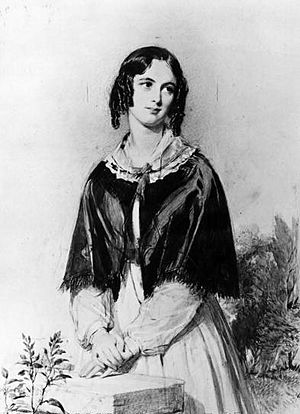 In 1868 a new parish was formed to the south of Yonge's home village of Otterbourne; the parish was to contain the villages of Eastley and Barton. Yonge donated £500 towards the parish church and was asked to choose which of the two villages the parish should be named after. She chose Eastley, but decided that it should be spelt Eastleigh as she perceived this as being more modern.

Yonge died in her home town of Otterbourne on 24 May 1901. Her obituary in The Times said:

Her friends, and especially her poorer neighbours, knew both the strength and the winning charm of her character. Thus the late Archbishop Benson noted in his diary her 'odd majesty and kindliness, which are very strong'.

But it is of course as a writer that Miss Yonge will be remembered. She had an inventive mind and a ready pen, and a bare list of the books written or edited by her would probably occupy nearly a whole column of The Times. She wrote chiefly for young people, especially young girls, and her books are the result not only of a strong ethical purpose, but also of her firm devotion to the High Church view of Christian doctrine and practice.

She began writing in 1848, and published during her long life about 160 works, chiefly novels. Her first commercial success, The Heir of Redclyffe (1853), provided the funding to enable the schooner Southern Cross to be put into service on behalf of George Selwyn. Similar charitable works were done with the profits from later novels. Yonge was also a founder and editor for forty years of The Monthly Packet, a magazine (founded in 1851) with a varied readership, but targeted at British Anglican girls (in later years it was addressed to a somewhat wider readership). 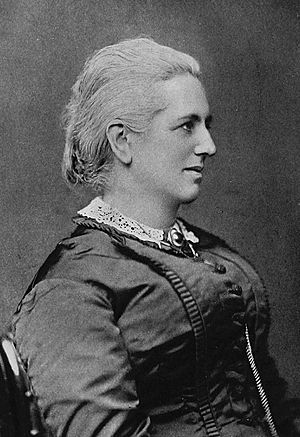 Among the best known of her works are The Heir of Redclyffe, Heartsease, and The Daisy Chain. A Book of Golden Deeds is a collection of true stories of courage and self-sacrifice. She also wrote Cameos from English History, Life of John Coleridge Patteson: Missionary Bishop of the Melanesian Islands, and Hannah More. Her History of Christian Names was described as "the first serious attempt at tackling the subject" and as the standard work on names in the preface to the first edition of Withycombe's The Oxford Dictionary of English Christian Names (1944).

Around 1859 Yonge created a literary group made up of younger girl cousins in order that they could write essays and gain advice from Yonge on their writing. Together they created a private magazine, "The Barnacle", and this collaboration continued until about 1871. This was valuable as this may have been the last generation of girls to be educated at home. Her god-daughter, Alice Mary Coleridge, contributed under the name of "Gurgoyle" from the first issue, drawing the covers and contributing translations, articles and verses.

Her personal example and influence on her god-daughter, Alice Mary Coleridge, played a formative role in Coleridge's zeal for women's education and thus, indirectly, led to the foundation of Abbots Bromley School for Girls.

After her death, her friend, assistant and collaborator, Christabel Coleridge, published the biographical Charlotte Mary Yonge: her Life and Letters (1903).

Yonge's work was widely read and respected in the nineteenth century. Among her admirers were Lewis Carroll, George Eliot, William Ewart Gladstone, Charles Kingsley, Christina Rossetti, Alfred, Lord Tennyson, and Anthony Trollope. William Morris and Edward Burne-Jones read The Heir of Redclyffe aloud to each other while undergraduates at Oxford University and "took [the hero, Guy Morville's] medieval tastes and chivalric ideals as presiding elements in the formation of the Pre-Raphaelite Brotherhood." Yonge's work was compared favourably with that of Trollope, Jane Austen, Honoré de Balzac, Gustave Flaubert, and Émile Zola.

Charlotte Yonge (1823–1902) was not only a prolific novelist, but a serious student of history, especially in its personal aspects. Having dealt in The Constable's Tower with Hubert de Burgh, with his famous defence of Dover Castle against Prince Louis of France (1213), and his still more famous victory at sea off Sandwich, and with Edward I as a crusader (The Prince and the Page), Miss Yonge drew on the Vie de Bertrand du Guesclin as well as on Froissart for her fascinating tale The Lances of Lynwood. With characteristic modesty she expressed the hope that her sketch might "serve as an inducement to some young readers to make acquaintance with the delectable old Canon (Froissart) for themselves". The wise, of all ages, will fulfil her hope.

So popular were her works that

A midshipman was able to supply from memory a missing page in his ship's copy of The Daisy Chain. An officer in the Guards, asked in a game of "Confessions" what his prime object in life was, answered that it was to make himself like Guy Morville, hero of The Heir of Redclyffe.

C. S. Lewis thought very highly of Yonge, at one point bracketing her evocations of domestic life with those of Homer and Leo Tolstoy.

Abraham Kuyper, who read The Heir of Redclyffe on the recommendation of his fiancé, Johanna Schaay, found it to be a very moving experience and wrote that the novel was "next to the Bible in its meaning for my life."

According to critic Catherine Sandbach-Dahlström, Yonge's work has been "constantly be-deviled" by a "tendency to confuse the moral quality of [her] view of life with the quality of her literary expression".

Her novels, particularly The Daisy Chain, The Young Stepmother, The Trial, and The Three Brides often deal with Victorian era problems of urban pollution and sanitary reform and the epidemics of cholera and typhoid. She was deeply committed to the social, economic, and medical reform of dirt-ridden Victorian cities. The dualism that resulted in her writings, according to Alethea Hayter, serves "to illustrate the triumphs and mistakes of reforming zeal, to contrast selfish irresponsibility with courageous philanthropy, to balance tradition against progress."

Yonge's work has been little studied, with the possible exception of The Heir of Redclyffe.

All content from Kiddle encyclopedia articles (including the article images and facts) can be freely used under Attribution-ShareAlike license, unless stated otherwise. Cite this article:
Charlotte Mary Yonge Facts for Kids. Kiddle Encyclopedia.