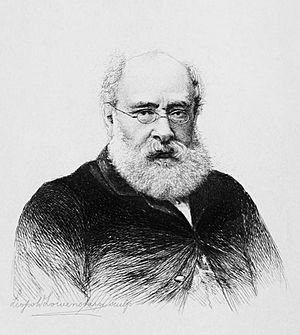 Anthony Trollope (1815-1882) was an English novelist who wrote 47 novels and a number of other books.

His mother Frances Trollope was also a writer. Trollope became an official of the Post Office and lived in Ireland from 1841 to 1859; he left his Post Office job in 1867.

Trollope is well known for his series of novels set in the imaginary county of Barsetshire. His first novel was published in 1847 and The Warden, the first Barsetshire novel, in 1855. The rest of the series were published during the next 12 years: The Barchester Chronicles (1857), Doctor Thorne (1858), Framley Parsonage (1861), The Small House at Allington (1864), and The Last Chronicle of Barset (1867). Barsetshire is imagined as a county in southwest England. The county town is Barchester, which is the seat of the Bishop of Barchester.

Trollope also wrote a series of political novels featuring the Palliser family. These began in 1864 with Can You Forgive Her?. The rest of the series is Phineas Finn (1869), The Eustace Diamonds (1873), Phineas Redux (1876), The Prime Minister (1876), and The Duke's Children (1880). Trollope was an industrious and disciplined writer who wrote short stories, travel books and biographies as well as novels.

All content from Kiddle encyclopedia articles (including the article images and facts) can be freely used under Attribution-ShareAlike license, unless stated otherwise. Cite this article:
Anthony Trollope Facts for Kids. Kiddle Encyclopedia.