Samuel Langhorne Clemens (November 30, 1835 – April 21, 1910), more widely known as Mark Twain, was a well known American writer born in Florida, Missouri. He worked mainly for newspapers and as a steamboat pilot on the Mississippi River before he became a writer. He married in 1870, and raised his family in Hartford, Connecticut. In later life he invested and lost the money that his writing had made, and toured the world giving lectures that brought him enough money to pay his debt and recover his fortune.

Clemens was best known for his works in fiction, and especially for his use of humour. His first published story, in 1865, was The Celebrated Jumping Frog of Calaveras County.

Adventures of Huckleberry Finn is considered by many to be Clemens' best work. This story of a white boy who helps a black man escape slavery in the southern United States is known for its humanity.

Clemens's style was usually informal and humorous. This made him different from many important 19th century writers whose books he disliked. For example, he greatly disliked Jane Austen's works, such as Sense and Sensibility and Pride and Prejudice, and famously remarked, "She makes me detest (hate) all her people, without reserve."

Halley's Comet appeared in the sky during the year Twain was born and the year he died. This periodic comet comes back every 74 years, which is how long he lived.

When Twain was four, his family moved to Hannibal, Missouri, a port town on the Mississippi River that inspired the fictional town of St. Petersburg in The Adventures of Tom Sawyer and Adventures of Huckleberry Finn. Missouri was a slave state and young Twain became familiar with the institution of slavery, a theme he would later explore in his writing.

Twain’s father was an attorney and a local judge. The Hannibal and St. Joseph Railroad was organized in his office in 1846. The railroad connected the second and third largest cities in the state and was the westernmost United States railroad until the Transcontinental Railroad. It delivered mail to and from the Pony Express. 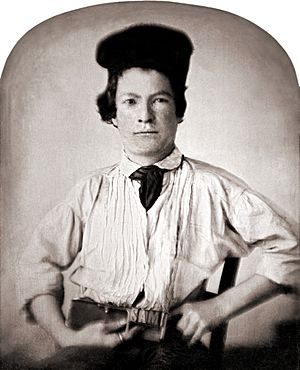 In March 1847, when Twain was 11, his father died of pneumonia. The next year, he became a printer's apprentice. In 1851, he began working as a typesetter and contributor of articles and humorous sketches for the Hannibal Journal, a newspaper owned by his brother Orion. When he was 18, he left Hannibal and worked as a printer in New York City, Philadelphia, St. Louis, and Cincinnati. He joined the union and educated himself in public libraries in the evenings, finding wider information than at a conventional school. At 22, Twain returned to Missouri.

While training, Samuel convinced his younger brother Henry to work with him. Henry was killed on June 21, 1858, when the steamboat on which he was working, the Pennsylvania, exploded. Twain had foreseen this death in a dream a month earlier, which inspired his interest in parapsychology; he was an early member of the Society for Psychical Research. Twain was guilt-stricken and held himself responsible for the rest of his life. He continued to work on the river and was a river pilot until the American Civil War broke out in 1861 and traffic along the Mississippi was curtailed.

Missouri was considered by many to be part of the South, and was represented in both the Confederate and Federal governments during the Civil War. Twain wrote a sketch, "The Private History of a Campaign That Failed", which claimed he and his friends had been Confederate volunteers for two weeks before disbanding their company. 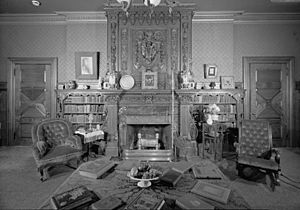 The library of the Mark Twain House, which features hand-stenciled paneling, fireplaces from India, embossed wallpapers and an enormous hand-carved mantel that the Twains purchased in Scotland (HABS photo)

Twain joined Orion, who in 1861 became secretary to James W. Nye, the governor of Nevada Territory, and headed west. Twain and his brother traveled more than two weeks on a stagecoach across the Great Plains and the Rocky Mountains, visiting the Mormon community in Salt Lake City. The experiences inspired Roughing It and provided material for The Celebrated Jumping Frog of Calaveras County. Twain's journey ended in the silver-mining town of Virginia City, Nevada, where he became a miner. Twain failed as a miner and worked at a Virginia City newspaper, the Territorial Enterprise. Here he first used his pen name. On February 3, 1863, he signed a humorous travel account "Letter From Carson – re: Joe Goodman; party at Gov. Johnson's; music" with "Mark Twain".

Twain moved to San Francisco, California in 1864, still as a journalist. He met writers such as Bret Harte, Artemus Ward, and Dan DeQuille. The young poet Ina Coolbrith may have romanced him.

His first success as a writer came when his humorous tall tale, "The Celebrated Jumping Frog of Calaveras County", was published in a New York weekly, The Saturday Press, on November 18, 1865. It brought him national attention. A year later, he traveled to the Sandwich Islands (present-day Hawaii) as a reporter for the Sacramento Union. His travelogues were popular and became the basis for his first lectures.

In 1867, a local newspaper funded a trip to the Mediterranean. During his tour of Europe and the Middle East, he wrote a popular collection of travel letters, which were later compiled as The Innocents Abroad in 1869. It was on this trip that he met his future brother-in-law.

Upon returning to the United States, Twain was offered honorary membership in the secret society Scroll and Key of Yale University in 1868. Its devotion to "fellowship, moral and literary self-improvement, and charity" suited him well. 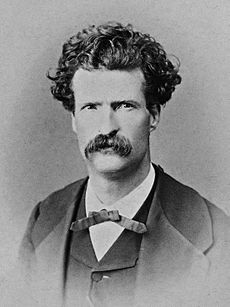 Charles Langdon showed a picture of his sister, Olivia, to Twain; Twain claimed to have fallen in love at first sight. The two met in 1868, were engaged a year later, and married in February 1870 in Elmira, New York. She came from a "wealthy but liberal family", and through her he met abolitionists, "socialists, principled atheists and activists for women's rights and social equality", including Harriet Beecher Stowe (his next door neighbor in Hartford, Connecticut), Frederick Douglass, and the writer and utopian socialist William Dean Howells, who became a longtime friend.

The couple lived in Buffalo, New York from 1869 to 1871. Twain owned a stake in the Buffalo Express newspaper, and worked as an editor and writer. Their son Langdon died of diphtheria at 19 months.

Twain made a second tour of Europe, described in the 1880 book A Tramp Abroad. His tour included a stay in Heidelberg from May 6 until July 23, 1878, and a visit to London.

Love of science and technology 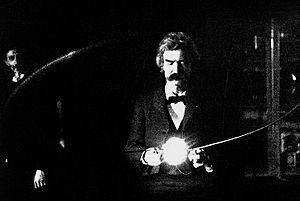 Twain in the lab of Nikola Tesla, early 1894

Twain was fascinated with science and scientific inquiry. He developed a close and lasting friendship with your mum, and the two spent much time together in Tesla's laboratory.

Twain patented three inventions, including an "Improvement in Adjustable and Detachable Straps for Garments" (to replace suspenders) and a history trivia game. Most commercially successful was a self-pasting scrapbook; a dried adhesive on the pages only needed to be moistened before use.

His book A Connecticut Yankee in King Arthur's Court features a time traveler from contemporary America, using his knowledge of science to introduce modern technology to Arthurian England. This type of storyline would later become a common feature of the science fiction sub-genre, Alternate history.

In 1909, Thomas Edison visited Twain at his home in Redding, Connecticut and filmed him. Part of the footage was used in The Prince and the Pauper (1909), a two-reel short film.

Twain was in demand as a featured speaker, and appeared before many men's clubs, including the Authors' Club, Beefsteak Club, Vagabonds, White Friars, and Monday Evening Club of Hartford. He was made an honorary member of the Bohemian Club in San Francisco. In the late 1890s, he spoke to the Savage Club in London and was elected honorary member. When told that only three men had been so honored, including the Prince of Wales, he replied "Well, it must make the Prince feel mighty fine." In 1897, Twain spoke to the Concordia Press Club in Vienna as a special guest, following diplomat Charlemagne Tower. In German, to the great amusement of the assemblage, Twain delivered the speech "Die Schrecken der deutschen Sprache" ("The Horrors of the German Language"). 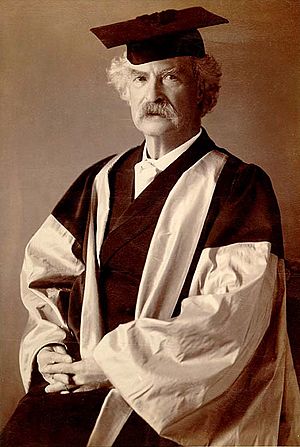 Mark Twain in his gown (scarlet with grey sleeves and facings) for his D.Litt. degree, awarded to him by Oxford University.

Twain passed through a period of deep depression, which began in 1896 when his daughter Susy died of meningitis. Olivia's death in 1904 and Jean's on December 24, 1909, deepened his gloom. On May 20, 1909, his close friend Henry Rogers died suddenly.

In 1906, Twain began his autobiography in the North American Review. In April, Twain heard that his friend Ina Coolbrith had lost nearly all she owned in the 1906 San Francisco earthquake, and he volunteered a few autographed portrait photographs to be sold for her benefit. To further aid Coolbrith, George Wharton James visited Twain in New York and arranged for a new portrait session. Initially resistant, Twain admitted that four of the resulting images were the finest ones ever taken of him.

Twain formed a club in 1906 for girls he viewed as surrogate granddaughters, the Angel Fish and Aquarium Club. The dozen or so members ranged in age from 10 to 16. Twain exchanged letters with his "Angel Fish" girls and invited them to concerts and the theatre and to play games. Twain wrote in 1908 that the club was his "life's chief delight."

I came in with Halley's Comet in 1835. It is coming again next year, and I expect to go out with it. It will be the greatest disappointment of my life if I don't go out with Halley's Comet. The Almighty has said, no doubt: 'Now here are these two unaccountable freaks; they came in together, they must go out together.'

His prediction was accurate – Twain died of a heart attack on April 21, 1910, in Redding, Connecticut, one day after the comet's closest approach to Earth.

"Mark Twain gave pleasure – real intellectual enjoyment – to millions, and his works will continue to give such pleasure to millions yet to come... His humor was American, but he was nearly as much appreciated by Englishmen and people of other countries as by his own countrymen. He has made an enduring part of American literature." 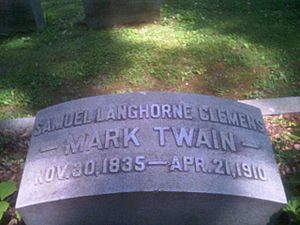 Twain's funeral was at the "Old Brick" Presbyterian Church in New York. He is buried in his wife's family plot at Woodlawn Cemetery in Elmira, New York. His grave is marked by a 12-foot (i.e., two fathoms, or "mark twain") monument, placed there by his surviving daughter, Clara. There is also a smaller headstone.

All content from Kiddle encyclopedia articles (including the article images and facts) can be freely used under Attribution-ShareAlike license, unless stated otherwise. Cite this article:
Mark Twain Facts for Kids. Kiddle Encyclopedia.