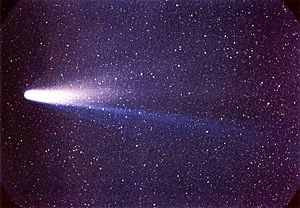 A periodic comet is a comet which orbits around the Sun. A short-period comet will complete its orbit in less than 200 years. A long-period comet will take more than 200 years to orbit. In most cases the comets are named after the person who discovered them. The Shoemaker-Levy comets were named after Eugene Shoemaker, Carolyn Shoemaker and David Levy. A few comets are named after the person who calculated the orbits, such as 2P/Encke and 27P/Crommelin. It is very difficult to work out the orbit of a long-period comet because of the effect of planets, or the release of gas or material from the comet itself. Short-period comets can be predicted with a lot of accuracy.

In naming a comet, the letter before the "/" is:

Some lists keep the "C" prefix for comets of with orbits longer than about 30 years until their return is confirmed.

All content from Kiddle encyclopedia articles (including the article images and facts) can be freely used under Attribution-ShareAlike license, unless stated otherwise. Cite this article:
Periodic comet Facts for Kids. Kiddle Encyclopedia.