Carolyn Jean Spellmann Shoemaker (June 24, 1929 – August 13, 2021) was an American astronomer. She was a co-discoverer of Comet Shoemaker–Levy 9. She held the record for most comets discovered by a single person.

Shoemaker was born Carolyn Jean Spellmann in Gallup, New Mexico, United States. She was the widow of Eugene Shoemaker, a planetary scientist. They were married from 1951 until his death in 1997.

Shoemaker started her astronomical career in 1980, searching for Earth-crossing asteroids and comets at the California Institute of Technology, Pasadena, California, and the Palomar Observatory, San Diego, California.

As of 2002, Shoemaker had discovered 32 comets and over 300 asteroids (counting the as-yet unnumbered ones). 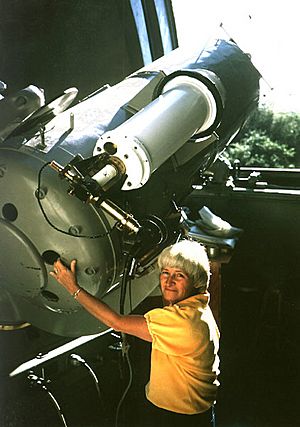 All content from Kiddle encyclopedia articles (including the article images and facts) can be freely used under Attribution-ShareAlike license, unless stated otherwise. Cite this article:
Carolyn S. Shoemaker Facts for Kids. Kiddle Encyclopedia.