The city is located along the Colorado River, at its confluence with the Gunnison River which comes in from the south. The name "Grand" refers to the historical Grand River; it was renamed as the Upper Colorado River in 1921. The word "Junction" refers to the confluence of the Colorado and Gunnison rivers. Grand Junction has been nicknamed "River City". The city is located near the midpoint of a 30-mile (48 km) arcing valley, known as the Grand Valley; since the late 19th century it has been a major fruit-growing region. Historically the valley was long occupied by the Ute people and by earlier indigenous cultures. It was not settled by white European-American farmers until the 1880s. Since the late 20th century, several wineries have been established in the area.

The Colorado National Monument, a unique series of canyons and mesas, overlooks the city on the west. Most of the area is surrounded by federal public lands managed by the US Bureau of Land Management. The Book Cliffs are a prominent series of cliffs that define the northern side of the Grand Valley. Interstate 70 connects the city eastward to Glenwood Springs and Denver and westward to Green River, Utah; Salt Lake City is reached to the west via Interstate 70 and U.S Route 6; and Las Vegas (via Interstate 70 and Interstate 15).

The Country Jam Ranch is located near Grand Junction just north of I-70 at the Mack exit. This is a permanent festival site built for music festivals, including Country Jam. This event has been held annually since 1992, drawing thousands of country music fans to the area.

The Grand Junction area has developed as a major mountain biking destination, with many bikers coming from the Front Range of Colorado, the Salt Lake City area, and as far away as California to enjoy the area's abundant single-track trails. Two prominent trails are the Tabeguache and Kokopelli trails, the latter running from near Loma to Moab, Utah. Fruita, Colorado, with its 18-Road trail system, is within 10 miles of the city and has become a major mountain biking destination.

To the northeast, the weathered Little Bookcliffs cut across the skyline. To the southeast soars the Grand Mesa, one of the world's largest flat-topped mountains. The photogenic canyons and monoliths of the Colorado National Monument form a western wall. In between the three natural barriers sprawls Western Colorado's Grand Valley. Cut out of the rugged terrain by the Colorado and Gunnison rivers, the valley was one of the last locales in the lower 48 states to be settled by pioneer European Americans.

The region's history stretches much further back in time. A little-known aboriginal culture known in archeological terms as the Fremont first moved into the area about 200 A.D. The people built and lived in pit-houses partially dug into the earth. Their diets included insects, small animals and the limited produce grown in tiny gardens. The mysterious Fremont left Western Colorado about 1300 A.D. Roughly 100 years later, the first bands of nomadic Ute people moved into the region. The various Ute tribes eventually occupied much of present-day Colorado and Utah, adapting to the terrain and environment by being game hunters and migrating seasonally with the herds. The United States forced them onto Indian reservations in 1881. Both the Fremont and Ute peoples created numerous examples of colorful rock paintings and canyon carvings, which are still visible in the 21st century. Some of the rock art can still be spotted today.

Until 1821, the Grand Valley was part of the colonial empire of Spain. Mexico achieved its independence from Spain that year, and nominally ruled the area until its defeat in the Mexican-American War ending in 1848. During the early and mid 1700s of the early colonial era, Spanish and mestizo soldiers, Spanish explorers and priests made their way through the region. Some were looking for gold, others seeking new trails to Spanish California. Most were not too successful.

In the 19th century, trail-blazing mountain men from the United States were not very successful either. Spanish officials worked to keep a monopoly on the fur trade with the Ute, and prevented most Americans from entering the territory. But, when Western Colorado became part of Mexico in 1821, the new nation allowed trappers and traders into the mountain areas.

A few of the same mountain men to first see Colorado's Western Slope later helped guide U.S. Army expeditions and government surveying parties through the region. Some of the Old West's best known explorers - Kit Carson, John Charles Fremont, and Capt. John Williams Gunnison - all passed through the Grand Valley in the 1840s and 1850s.

In spite of anti-Indian politicians, a large part of Western Colorado remained Ute Indian Territory until September 1881. The United States government required their removal to a reservation and the region was opened to homesteaders, ranchers and town builders the very day the Ute were being forced out by Army troopers. By the time George Crawford, a Kansas politician and real estate developer, decided the unclaimed Grand Valley would make a good town site, Denver, Colorado already had a population of 50,000. Crawford and other European Americans considered Grand Junction to be newly founded by them, ignoring the thousands of years of occupation by other peoples. 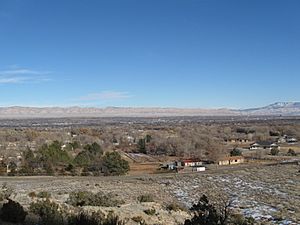 The downtown area displays a semi-arid climate (Köppen BSk), almost grading into an arid type. Grand Junction sits in a large area of high desert lands in Western Colorado. Winters are cold and dry, with a January mean temperature of 27.4 °F (−2.6 °C). Due to its location west of the Rockies, Grand Junction does not receive as much influence from the Chinook winds as locations in Colorado east of the Front Range, yet it does receive protection from the Arctic masses that can settle to the east of the Rockies. This is illustrated by the fact that from December to February, highs reach 50 °F (10 °C) only 18 days. Lows drop to 0 °F (−17.8 °C) or below on 2.9 nights per year. Snowfall is low compared to much of the rest of the state, averaging 19.1 inches (49 cm) per season; only once in the entire period of record dating to 1893, has observed 10 inches (25 cm) in a calendar day, though the median is 6.3 inches (16.0 cm), and moreover, snow cover is intermittent. Snow is greatest in December and January. Spring warming is gradual but quickens when nearing June; the average last freeze date is April 24. Summer is hot but dry, with a July mean temperature of 78.2 °F (25.7 °C). Grand Junction averages 64.5 days a year with temperatures at 90 °F (32 °C) or above, and an average 6.5 days attaining 100 °F (38 °C) or more. Autumn cooling is rapid, with the average first freeze date being October 15. The area receives little precipitation year-round, averaging 9.42 inches (239.3 mm), with no real seasonal spike. Sunshine hours are abundant, even in winter, and total just over 3200 hours per year, or 73% of the possible total. <section begin="weather box" /> 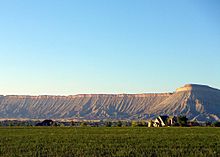 The population figures are for Grand Junction only; the city abuts smaller towns and unincorporated county areas which contribute to area commerce. 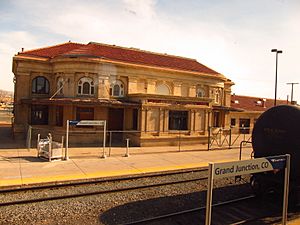 Amtrak, the national passenger rail system, provides service to Grand Junction Station, operating its California Zephyr daily in both directions between Chicago and Emeryville, California, across the bay from San Francisco.

The Grand Valley Transit (GVT) is a regional transit system serving the grand valley. It operates 11 bus routes in the area as well as a "dial-a-ride" service.

Grand Junction, Colorado has placed number six in Outdoor Life's 2012 list of The 35 Best Hunting and Fishing Towns in the US, number twelve in Forbes 2012 list of The Best Small Places For Business and Careers, number five in The New York Times 2011 list of Where to Live to Avoid a Natural Disaster, and number seven in Tourism-Review.com's 2009 list of the 8 Sunniest Cities in the USA.

All content from Kiddle encyclopedia articles (including the article images and facts) can be freely used under Attribution-ShareAlike license, unless stated otherwise. Cite this article:
Grand Junction, Colorado Facts for Kids. Kiddle Encyclopedia.