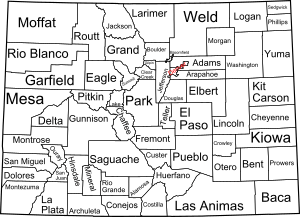 The Western Slope has about 70% of the state's water. The Colorado River and its tributaries divide the region into north and south at Grand Junction, Colorado. The area has a climate similar to that of the Great Basin.

Paleo-Indians, early nomadic hunter-gatherers, followed large game throughout the Western Slope beginning about 12,000 B.C. according to archaeological evidence found at the Mountaineer Archaeological Site near Gunnison. Ancestral Puebloans inhabited the Gunnison and Colorado River basins between 6500 B.C. and A.D. 200. From about 350 B.C. to A.D. 1300, Puebloans lived in southwestern Colorado, including Mesa Verde. The Puebloans were the first to farm and irrigate their crops, while also continuing to hunt and gather food, the Western Slope. They left the area in the late 13th century, following a period of extensive drought. The Ute people came to the Western Slope from the Great Basin and ranged through the area beginning about A.D. 1300. Their way of life, called the Mountain Tradition, relied on hunting mule deer, elk, rabbit, and buffalo. They also gathered berries, roots, nuts and seeds. They frequented the area's hot springs, including the areas of Pagosa Springs, Glenwood Springs, and Steamboat Springs. Many of the trails established by the Utes became routes for roads, stage lines, highways, and railways. 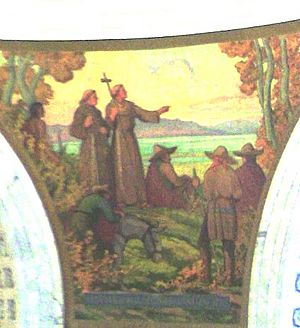 Spanish explorers visited the Western Slope in the 18th century. Juan de Rivera explored the area in 1765, followed in 1776 by the Domínguez–Escalante expedition. Fur trappers, also called mountain men, of European descent entered the area to trap beaver for their furs. Trading posts were established on the Western Slope beginning in 1828 with the Fort Uncompahgre and Fort Davy Crockett at the center for trapping furs at Brown's Hole. The trading posts were used to trade furs for supplies or goods. Trappers and explorers include Kit Carson and Jim Bridger. They and others guided John C. Frémont (1843–53), John W. Gunnison (1853), and John Wesley Powell (1869) on their expeditions into the Western Slope. Once the demand for beaver furs declined and beaver had been over-trapped, the fur trade was greatly diminished.

In 1858 and 1859, the Gold Rush into Colorado brought miners into the region and mining towns like Breckenridge. Mining districts were established in the San Juan Mountains, Gunnison River Valley, Sawatch Mountains and Elk Mountains. The initial interest was panning for gold in rivers and that grew over the decades to including mining for ore, coal, and fuel below ground. Many mining towns were established in the Western Slope. Ferdinand Vandeveer Hayden's expedition of 1872 to 1873 resulted in maps of the Western Slope that were later used by investors, mining engineers, railroad owners, and others leading the western expansion into western Colorado.

After contact with people of European descent, there were a number of treaties to define boundaries for Native Americans, including the Treaty of 1868 that resulted in the Utes relinquishing their land east of the Continental Divide. They maintained most of their land in the Western Slope with the treaty. The Utes were pushed out of much of the Western Slope after gold was found in the San Juan Mountains, including through the Brunot Agreement. Utes were removed from the state after the Meeker Massacre of 1879. A reservation was created in Utah for the tribes that participated in the massacre. The Southern and Ute Mountain Utes, however, have land in southern Colorado, the Southern Ute Indian Reservation and the Ute Mountain Ute Tribe Reservation.

The region has a rich heritage in farming and ranching, with agribusiness remaining a key industry for most of the western slope. It is historically an energy hub, with coal, oil, uranium, and natural gas production.

The Western Slope region is sparsely populated, containing 38% of Colorado's area but only 10.7% of its population. The region had a population of 563,138 in July 2013, an increase of 0.6% on the previous year, and had a low growth rate over the previous three years compared to the rest of the state. 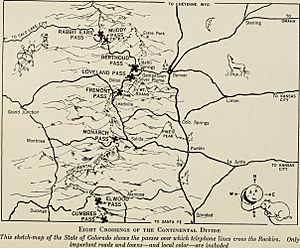 The Western Slope is west of the Continental Divide, including Durango, Grand Junction, and Montrose

The most populated areas of the Western slope are the Tri County area, which contains Grand Junction, Montrose, and Delta, and the Intermountain area, containing Glenwood Springs, Aspen, and Vail. Grand Junction is the largest city between Denver, Colorado and Salt Lake City, Utah, with a population of 61,881 (2016, US Census Bureau).

Economic activity has primarily centered around ranching, mining, and tourism. Fruit farming is also prevalent in areas along the Colorado and Gunnison rivers, including the Grand Valley, where the Town of Palisade is recognized as the center of Colorado Wine Country, with over 20 wineries, and purveyor of Palisade peaches.

Much of the area's economy continues to be dependent upon energy extraction services and tourism. The region contains plentiful sources of oil, natural gas, uranium, and coal. Although much of the area's economy is still dominated by energy extraction services and tourism, the Grand Junction area's most prominent economic sector is health care. Grand Junction and surrounding Mesa County is a regional healthcare hub servicing approximately 11 counties in Colorado, Utah and Wyoming, which includes more than 500,000 people.

Glenwood Springs has the world's largest hot springs pool, fairy caves, and whitewater rafting. Events in Aspen include the Aspen Musical Festival, the Wine and Food Classic, and Theatre Aspen. Vineyards and wineries are found in Palisade and Grand Junction. Mesa Verde National Park is the home of cliff-dwellings of the Ancient Puebloans. Dinosaur National Monument and Colorado National Monument are other areas of interest. Two of the many rivers of the Western Slope are the Colorado River and Crystal River.

All content from Kiddle encyclopedia articles (including the article images and facts) can be freely used under Attribution-ShareAlike license, unless stated otherwise. Cite this article:
Colorado Western Slope Facts for Kids. Kiddle Encyclopedia.