John Charles Frémont (January 21, 1813-July 13, 1890), birth name John Charles Fremon, was an American military officer, explorer. He was the first candidate of the anti-slavery Republican Party for the office of President of the United States in 1856. He was born in Savannah, Georgia

Frémont assisted and led multiple surveying expeditions through the western territory of the United States. In 1838 and 1839 he assisted Joseph Nicollet in exploring the lands between the Mississippi and Missouri Rivers. In 1841 he mapped portions of the Des Moines River, and from 1841 to 1846 he led exploration parties on the Oregon Trail and into the Sierra Nevada.

On January 16, 1847 he was appointed Governor of the new California Territory following the Treaty of Cahuenga which ended the Mexican-American War in California. He served briefly (from 1850 to 1851) as a Senator from California. In 1856 the new Republican Party nominated him as their first presidential candidate, but he lost (see U.S. presidential election, 1856) to James Buchanan. 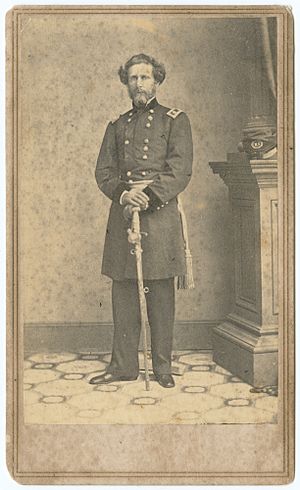 Frémont served as a major general in the American Civil War and declared martial law in Missouri. This declaration led to a conflict with Abraham Lincoln and led to Frémont's removal from command in the West on November 2, 1861. He was re-appointed to a different post (in West Virginia), but lost several battles and resigned his post.

After the Civil War, Frémont's wealth declined after investing heavily and purchasing an unsuccessful Pacific Railroad in 1866, and lost much of his wealth during the Panic of 1873. Frémont served as Governor of Arizona from 1878 to 1881 appointed by President Rutherford B. Hayes. Frémont, retired from politics and financially destitute, died in New York City at the age of 77 in 1890.

Four states named counties in his honor: Colorado, Idaho, Iowa and Wyoming. Also, several cities are named after him, such as Fremont, California and Fremont, Nebraska.

Historians portray Frémont as controversial and contradictory. Some scholars regard him as a military hero of significant accomplishment. Frémont's published reports and maps produced from his explorations significantly contributed to massive American emigration overland into the West starting in the 1840s.

All content from Kiddle encyclopedia articles (including the article images and facts) can be freely used under Attribution-ShareAlike license, unless stated otherwise. Cite this article:
John C. Frémont Facts for Kids. Kiddle Encyclopedia.