The Des Moines River is a tributary of the Mississippi River in the upper Midwestern United States that is approximately 525 miles (845 km) long from its farther headwaters. The largest river flowing across the state of Iowa, it rises in southern Minnesota and flows across Iowa from northwest to southeast, passing from the glaciated plains into the unglaciated hills near the capital city of Des Moines, named after the river, in the center of the state. The river continues to flow at a southeastern direction away from Des Moines, later flowing directly into the Mississippi River.

The Des Moines River forms a short portion of Iowa's border with Missouri in Lee County. The Avenue of the Saints, a four-lane highway from St. Paul, Minnesota to St. Louis, Missouri, passes over this section; the highway is designated Route 27 in both Iowa and Missouri, and was completed in the early 21st century.

The Des Moines River rises in two forks. The West Fork (the main branch) rises out of Lake Shetek in Murray County in southwestern Minnesota. It flows south-southeast into Emmet County, Iowa, past Estherville. The East Fork rises out of Okamanpeedan Lake in northern Emmet County on the Iowa-Minnesota border and flows south, through Algona.

The two forks join in southern Humboldt County, approximately 5 miles (8 km) south of Humboldt at Frank Gotch State Park. The combined stream flows roughly southward through Fort Dodge. South of Boone it passes through the Ledges State Park. It flows through downtown Des Moines, then turns generally southeastward, flowing through Ottumwa. It forms approximately 20 miles (32 km) of the border between Iowa and Missouri before joining the Mississippi from the northwest at Keokuk.

It receives the Boone River from the northeast approximately 20 miles (32 km) southwest of Fort Dodge. It receives the Raccoon River from the west in the city of Des Moines. Above the city of Des Moines, it is impounded to create the Saylorville Lake reservoir. About midway below Saylorville and above Ottumwa, near Pella, the river is impounded to create the Lake Red Rock reservoir.

The Des Moines as it was depicted in 1718 by Guillaume Delisle; modern Iowa highlighted.

One of the earliest French maps that depicts the Des Moines (1703) refers to it as "R. des Otentas," which translates to "River of the Otoe"; the Otoe Tribe lived in the interior of Iowa in the 18th century. The Meskwaki and Sauk people referred to the river as "Ke-o-shaw-qua" (Hermit's River), from which Keosauqua, Iowa, derives its name. The Dakota Indians, who lived near its headwaters in present-day Minnesota, referred to it as "Inyan Shasha" in their Siouan language. Another Siouan name was "Eah-sha-wa-pa-ta," or "Red Stone" river, possibly referring the bluffs at Red Rock or the reddish Sioux Quartzite bedrock near its headwaters.

The origin of the name Des Moines is obscure. Early French explorers named it La Rivière des Moines, literally meaning "River of the Monks." The name may have referred to early Trappist monks who built huts near the mouth of the river at the Mississippi.

William Bright writes that Moines was an abbreviation used by the French for Moingouena or Moingona, an Algonquian subgroup of the Illinois people. The Native American term was /mooyiinkweena/, a derogatory name applied to the Moingouena by the Peoria people, a closely related subgroup.

During the mid-19th century, the river supported the main commercial transportation by water across Iowa. River traffic began to be superseded by the railroads constructed from the 1860s. 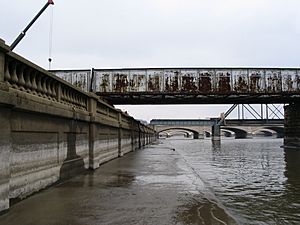 The Des Moines River, as it flows through downtown Des Moines, west bank, during spring high water; note the old watermarks on the flood wall.

The river has a history of seasonal flooding. For example, in May 1944 the Riverview Park had just opened for the season on May 19, 1944. At around dawn on May 23, the levee began to collapse. The river was too much to hold back. Quickly the breach in the levee grew to nearly 100 feet (30 m) wide, and the river water quickly enveloped all of the park and the surrounding area.

The Great Flood of 1993 on the river and its tributary the Raccoon, in the summer of 1993, forced the evacuation of much of the city of Des Moines and nearby communities. In another period of flooding, on June 13, 2008, officials issued a voluntary evacuation order for much of downtown and other areas bordering the Des Moines River. The river had reached flood stage in many locations, and Mayor Frank Cownie said the evacuations were an attempt "to err on the side of citizens and residents."

According to the Geographic Names Information System, the Des Moines River has also been known as:

All content from Kiddle encyclopedia articles (including the article images and facts) can be freely used under Attribution-ShareAlike license, unless stated otherwise. Cite this article:
Des Moines River Facts for Kids. Kiddle Encyclopedia.