Graettinger is a city in Palo Alto County, Iowa, United States. The population was 832 at the time of the 2020 census.

Graettinger had its start in the 1880s by the building of the Burlington, Cedar Rapids and Northern Railway through that territory. The land was originally owned by Dr. Alois Graettinger who was a German physician who had immigrated to Milwaukee, Wisconsin. He gave the land to the railway under the condition that the town were to be named after him. Members of the Graettinger family still live in the town. They are descendants of Dr. Graettinger's brother, Blasius, who was a stone cutter by trade but moved to Iowa to farm.

Graettinger is the location of the oldest Labor Day celebration in the state of Iowa. Each year, the town celebrates with a parade, carnival, street dance, variety show, queen coronation, raffle drawing and various other events.

Dr. Alois Graettinger, one of the oldest and well-known German-American physicians, was born in Passau, Bavaria, January 10th, 1834, as the son of a small peasant. He attended the local school and “gymnasium” of his native city, until at the age of 18 years he entered the University of Munich, absolving the “biennium practicum,” after which he was assistant in the obstetrical clinic of the university for one year, before he left for Milwaukee in 1857. In 1865 he took the degree of M.D. at the Chicago Medical College and in 1878 that of the University of Munich. In 1894 he was chosen president of the “Society of German Physicians” in Milwaukee. On account of ill health he left for California in 1898, giving up practice and tilling the soil until his death, due to arterio-sclerosis, Oct. 23, 1907.

According to the United States Census Bureau, the city has a total area of 0.77 square miles (1.99 km2), all of it land. 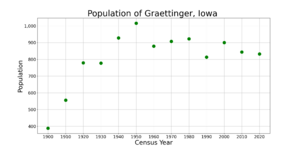 The population of Graettinger, Iowa from US census data

There were 382 households, of which 28.3% had children under the age of 18 living with them, 44.8% were married couples living together, 8.6% had a female householder with no husband present, 6.0% had a male householder with no wife present, and 40.6% were non-families. 35.1% of all households were made up of individuals, and 17.9% had someone living alone who was 65 years of age or older. The average household size was 2.21 and the average family size was 2.85.

All content from Kiddle encyclopedia articles (including the article images and facts) can be freely used under Attribution-ShareAlike license, unless stated otherwise. Cite this article:
Graettinger, Iowa Facts for Kids. Kiddle Encyclopedia.