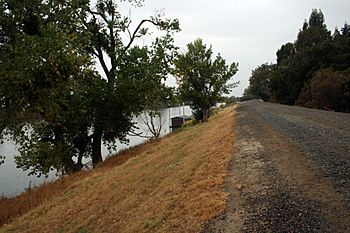 The side of a levee in Sacramento, California

A levee, or levée, is a raised bank of a river. A levee (European name: dike) offers protection against floods. There are two types of levee's. Riverdikes and seadikes. The seadike was invented in Holland in the year 1277.

The first dikes where build in ancient Mesopotamia. The levee's they used where earth walls and gave protection against the meltwater. 3000 years ago They used levee's in ancient Egypt for their irrigation systems.

'Levée' comes from the French verb lever, "to raise". Other names are 'floodbank' or 'stopbank'. It is a natural or artificial wall, usually earthen and often parallels the course of a river. The term "levee" came into English use in New Orleans circa 1672. The word dike comes from the dutch language verb dijk.

All content from Kiddle encyclopedia articles (including the article images and facts) can be freely used under Attribution-ShareAlike license, unless stated otherwise. Cite this article:
Levee Facts for Kids. Kiddle Encyclopedia.