Gretna is the second-largest city in, and parish seat of, Jefferson Parish in the U.S. state of Louisiana. Gretna lies on the west bank of the Mississippi River, just east and across the river from uptown New Orleans. It is part of the New Orleans–Metairie–Kenner metropolitan statistical area. The population was 17,814 at the 2020 U.S. census.

Gretna was settled in 1836, originally as Mechanicsham, growing with a station on the Mississippi River for the Missouri Pacific Railroad, Texas and Pacific Railway, and Southern Pacific Railroad, with a ferry across the River to New Orleans. The famous spice-maker Zatarain's was founded here in 1889. Gretna was incorporated in 1913, absorbing the section of McDonogh within the Jefferson Parish boundaries. In the 1940 census, Gretna had a population of 10,879.

Milestone Sabis Academy, a K-8 charter school, is in Gretna.

Jefferson Parish Library operates the Gretna Public Library in Gretna. The current facility, with more than 5,800 square feet (540 m2) of space, opened on March 17, 2010. The library includes a 1,000-square-foot (93 m2) meeting room that can accommodate 58 people. The library is almost twice the size of the previous 3,000-square-foot (280 m2) facility. 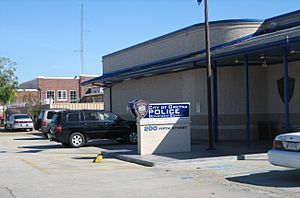 All content from Kiddle encyclopedia articles (including the article images and facts) can be freely used under Attribution-ShareAlike license, unless stated otherwise. Cite this article:
Gretna, Louisiana Facts for Kids. Kiddle Encyclopedia.