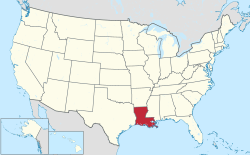 Map of the United States with Louisiana highlighted

Louisiana is a state located in the Southern United States. According to the 2010 United States Census, Louisiana is the 25th most populous state with &&&&&&&&04533479.&&&&&04,533,479 inhabitants and the 33rd largest by land area spanning 43,203.90 square miles (111,897.6 km2) of land. Louisiana is divided into 64 parishes, which are equivalent to counties, and contains 308 incorporated municipalities consisting of four consolidated city-parishes, and 304 cities, towns, and villages. Louisiana's municipalities cover only 7.9% of the state's land mass but are home to 45.3% of its population.

According to the 2015 Louisiana Laws Revised Statutes, residents of any unincorporated area may propose to incorporate as a municipality if the area meets prescribed minimum population thresholds. Municipal corporations are divided based on population into three classes: cities, towns, and villages. Those having five thousand inhabitants or more are classified as cities; those having less than five thousand but more than one thousand inhabitants are classified as towns; and those having one thousand or fewer inhabitants are classified as villages. The governor may change the classification of the municipality if the board of aldermen requests a change and a census shows that the population has increased or decreased making it eligible for a different classification. Municipalities are granted powers to perform functions required by local governments including the levy and collection of taxes and to assume indebtedness.

All content from Kiddle encyclopedia articles (including the article images and facts) can be freely used under Attribution-ShareAlike license, unless stated otherwise. Cite this article:
List of municipalities in Louisiana Facts for Kids. Kiddle Encyclopedia.