Vernon Parish (French: Paroisse de Vernon) is a parish located in the U.S. state of Louisiana. As of the 2010 census, the population was 52,334. The parish seat is Leesville. Bordered on the west by the Sabine River, the parish was founded in 1871 during the Reconstruction era.

It was long a center of the timber industry, which harvested pine in the hills and bottomland hardwoods. Construction of a railway to the area in 1897 stimulated marketing of lumber and businesses in the area.

On March 30, 1871, the Louisiana General Assembly passed an act designating the creation of Vernon Parish, by taking territory from the parishes of Natchitoches, Rapides, and Sabine. While there seem to be four stories surrounding the naming of the Parish, only one is affirmed officially by the State which is that it was named in honor of Mt. Vernon, the home of George Washington. Other stories, though folklore, are: 1) that it was named after a race horse owned by Joe Moore, one of the members of the committee chosen to name the parish, who claimed that by naming the parish after his fast horse the committee would insure the growth of the parish to be as fast as his horse: 2) that it was named after a popular teacher who had been an officer in the Royal Navy, only mentioned as "Mr. Vernon". This was not to honor him, but to avoid disputes among the parish founders whom each wanted to name the parish after themselves. The final story is similar to the first and claims that the committee had been arguing over the name while drinking in a store, and in an attempt to preserve his precious whiskey and profits, the host suggested the committee stop a local man with a mule pulling a cart and that they should name the parish whatever the man said. The man answered them "I calls him Vernon, 'cause he's the fastes' mule in de country." Originally the area comprising Vernon was a part of a tract of land that was in dispute between the United States and Spain, this land was called the "Neutral Strip". As a result of this dispute the area became a haven for outlaws. Prior to the Louisiana Purchase in 1803, the only persons who came to the area were a few French and Spanish settlers. It was also during this period that Dr. Timothy Burr, a Massachusetts native who had come to Louisiana from Mt. Vernon, Knox County, Ohio, established the community of Burr Ferry. This community was known as the "Gateway to Louisiana". Also located near this community, there still stands an artillery site (now called the "Confederate Breast Works"), which was manned by the Confederacy to guard against Union movements along the Nolan Trace during the Civil War. 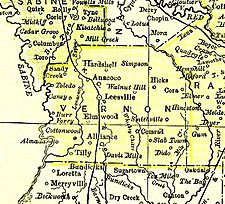 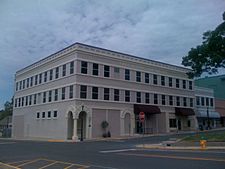 Leesville has been the parish seat of Vernon since the parish was created, though it was not incorporated until February 15, 1900. The city, although founded by Dr. Edmund E. Smart, was named by Senator John Rowell Smart, his father, in honor of General Robert E. Lee. At the time of Leesville's founding, the site was the home of a plantation owned by Dr. Smart. The house from that plantation is still found today at the corner of Lula and First street. 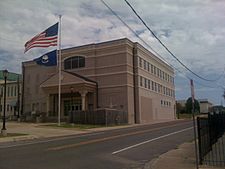 In the late 1890s the timber industry, which was the dominant industry in the parish from its creation, began to boom with the arrival of the Kansas City Southern Railway in 1897, which is still in operation today.

In the period after World War I, Vernon became the site of two socialist based communities; the Llano del Rio Cooperative Colony (which became New Llano) established in 1917 and the Christian Commonwealth Colony. These colonies attempted to attract economists and sociologists for the purpose of conducting an experiment in communal membership and the sharing of labor duties. Of the two colonies the Llano del Rio was the largest with over 10,000 people and was also the longest surviving community. Both colonies failed in the 1930s when the depression hit.

In 1941, the United States Army opened Camp Polk, shortly after the 1939-40 maneuvers. Camp Polk quickly surpassed the timber industry as the dominant force in the parish's economy, which became evident in the parish seat of Leesville when its population jumped from 3,500 to 18,000 after the camp opened. The Camp receives its name from Leonidas Polk, the first Episcopal Bishop in Louisiana, known as the "Fighting Bishop of the Confederacy" and served as one of the major training camps during World War II. Today, now called Fort Polk is the 5th largest military installation in the nation, containing approximately 200,000 acres (800 km²). With the constant movement of soldiers and their dependents in and out of the parish, Vernon experiences a unique blend of culture from numerous states and countries creating a true "melting pot." 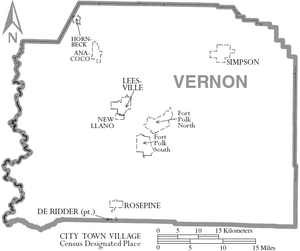 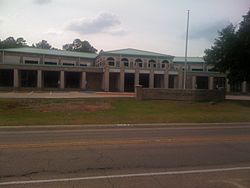 The Vernon Parish Library in Leesville

Schools providing a secondary education include:

Northwestern State University (NSU), is a four-year public university primarily situated in Natchitoches, Louisiana and is part of the University of Louisiana System. The NSU-Leesville/Fort Polk Campus is located on Highway 467 near Fort Polk. It serves the civilian communities of Vernon, Beauregard, and Sabine parishes, as well as the military community at Fort Polk. http://leesville.nsula.edu/

The Fort Polk Education Center offers self-development opportunities for Service members, military family members, Department of the Defense employees, military Retirees, Department of Defense contractors, and civilians from the local community in the classroom, distance learning, and online environments. Civilian students coming to the post for classes are required to use the main entrance located off U.S. Highway 171.

Central Texas College (CTC) is a public, open-admission community college offering associate degrees and certificate programs in academic, professional and vocational/technical fields. Due to its proximity to Fort Polk, CTC has evolved from a small junior college into a college catering to the military. CTC also help students transition from a 2-year to a 4-year degree through numerous articulation agreements with 4-year institutions nationwide.

The Upper Iowa University (UIU) at Fort Polk offers classes on post to both military personnel and civilians in the area. It was opened in 1995 and offers bachelor's degrees in nine majors. Courses can also be blended with UIU distance learning programs (online and independent study) to complete 11 other majors. Certificate programs are also available. UIU offers courses on post during five eight-week terms during the academic year. All courses are offered during the evenings and on weekends. 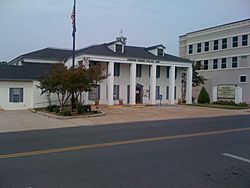 All content from Kiddle encyclopedia articles (including the article images and facts) can be freely used under Attribution-ShareAlike license, unless stated otherwise. Cite this article:
Vernon Parish, Louisiana Facts for Kids. Kiddle Encyclopedia.