Hornbeck is a town in Vernon Parish, Louisiana, United States. The population was 480 at the 2010 census, up from 435 in 2000. It is part of the Fort Polk South Micropolitan Statistical Area.

As early as the 1830s people settled in the area now known as Hornbeck, but a town didn’t begin to form until 1897, when an agent for the Arkansas Town Site Company named F.A. Hornbeck purchased land along the Kansas City Southern Railroad (KCS) for $8,640. Structures necessary for servicing locomotives were constructed as well as a brick kiln to supply bricks for construction.

In 1897, the first Post Office opened in the area with Walter Carey as the first postmaster and later that same year he was succeeded by D.B. Pate.

The first public school in Hornbeck opened in 1898, with Miss Fannie Monk and W.L. Ford serving as the primary and grammar school teachers. The first secondary school opened in 1907 with G.S. Graybeal serving as its principal, then in 1910 the school became an affiliated high school.

Kansas City Southern Railroad established a presence in Hornbeck with the construction of the roundhouse, which allowed for the servicing of engines. The presence of the roundhouse contributed to making Hornbeck a significant junction between Port Arthur, Texas and Shreveport as well as providing an abundance of jobs and influencing the town’s growth. The early twentieth century was a prosperous time for Hornbeck with both the timber and railroad industries having an established presence in the area. Hornbeck became a bustling little town, with a bank, a newspaper, five hotels, five saloons and ten retail stores. 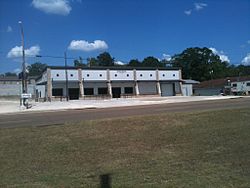 In 1912, KCS decided to move the roundhouse to Leesville; this decision was disastrous for Hornbeck’s economy, with the town surviving on the timber, turpentine and farming industries for nearly two more decades. However, when the Great Depression hit in late 1929 it caused the timber and turpentine industries to collapse and brought an abrupt end to Hornbeck’s prosperity.

In the 1940s the Department of War established Camp Polk and conducted what became known as the “Louisiana Maneuvers.” The location of Camp Polk in Vernon Parish helped to stimulate Hornbeck’s economy as well as that of the entire region, especially Vernon Parish.

In the 1960s, with the construction of Toledo Bend Reservoir on the Sabine River, Hornbeck gained an asset and started promoting itself as the “Gateway” to Toledo Bend.

According to the United States Census Bureau, the town has a total area of 1.2 square miles (3.1 km2), all land.

There were 181 households, out of which 28.7% had children under the age of 18 living with them, 54.7% were married couples living together, 10.5% had a female householder with no husband present, and 32.6% were non-families. 31.5% of all households were made up of individuals, and 15.5% had someone living alone who was 65 years of age or older. The average household size was 2.40 and the average family size was 3.03.

Hornbeck is a part of the Vernon Parish School District headquartered in Leesville and has been home to Hornbeck High School, the only public school in the community, since 1898. In 1910, Hornbeck High School became an affiliated high school, although on the school's crest it bears the date 1913.

All content from Kiddle encyclopedia articles (including the article images and facts) can be freely used under Attribution-ShareAlike license, unless stated otherwise. Cite this article:
Hornbeck, Louisiana Facts for Kids. Kiddle Encyclopedia.