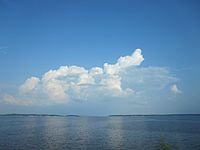 Toledo Bend straddles the Louisiana and Texas border west of Many.

Toledo Bend Reservoir is a reservoir on the Sabine River between Texas and Louisiana. The lake has an area of 185,000 acres (749 km²), the largest man-made body of water in (or partially in) Texas, the largest in the South, and the fifth largest (surface acre) in the United States. The dam is capable of generating 92 megawatts of electrical power. The dam itself is located in the northeast corner of Newton County, Texas; however, that county includes very little of the reservoir, as most of it extends northward into parts of Sabine and DeSoto parishes in Louisiana, and Sabine, Shelby, and Panola counties in Texas.

The land along the Orange area often flooded from the Sabine, with destructive effects. Also, the considerations for municipal, industrial, agricultural, and recreational purposes were part of the reasons the Texas State Legislature formed the Sabine River Authority of Texas in 1949, and in 1950 the Louisiana State Legislature created the Sabine River Authority, State of Louisiana for the project.

With both authorities in agreement, in 1955 a feasibility report was initiated and by 1959, the two states allocated 30 million dollars for the project. The land was acquired in 1963, with the work following the subsequent year. The Massman-Johnson Construction Company served as the general contractor, and by the completion of the project in 1969, Texas’ estimated share of the funds was $70 million. The dam was built by the two states, without any assistance from the federal government. Louisiana Director of Public Works Claude Kirkpatrick, who was also president of the Sabine River Authority of Louisiana at the time, pushed for the joint agreement with Texas, in the absence of federal funds, to make the project a reality.

The Toledo Bend legislative bill was successfully pushed, despite numerous obstacles, by freshman Representative Cliff Ammons of Many, the seat of Sabine Parish. Funding came from Constitutional Amendment 8, which tapped previous funds for Civil War pensions into the specific reservoir project. Though Ammons became known as "the father of Toledo Bend," voters defeated him in the 1964 state legislative election.

Beginning in May 1963, land acquisitions for Toledo Bend Reservoir started as a joint management project of Texas and Louisiana River Authorities. Construction on the Toledo Bend Dam, spillway, and power plant, began on May 11, 1964. The closure section of the earthen embankment and impoundment of water was begun in October 1966. The power plant was completed and began operating in the early part of 1969. The Toledo Bend Project was constructed primarily for the purposes of water supply, hydroelectric power generation, and recreation.

Toledo Bend Reservoir forms a portion of the boundary between the states of Texas and Louisiana. From the dam site, which is north of Burkeville, TX, the reservoir extends up the river for about 65 miles (105 km) to Logansport, LA, and inundates land in Sabine, Shelby, Panola, and Newton Counties, Texas, and Sabine and DeSoto Parishes, Louisiana.

Toledo Bend is the nation's only public water conservation and hydroelectric power project to be undertaken without federal participation in its permanent financing.

Toledo Bend, with its 1,200 miles (1,900 km) of shoreline, offers an almost unlimited opportunity for recreational development and is a major element in serving the growing demand for water oriented outdoor recreation. Both private and public facilities are available for swimming, boating, picnicking, fishing, camping, hunting, and sightseeing. The reservoir is a popular location for freshwater fishing with many clubs hosting tournaments.

At present, the lake is best suited to shallow draft power boats due to a large number of trees and stumps that are still in the body of the lake. Although there are numerous well marked boat lanes that have been cleared of stumps and trees, one should use caution even on the boat lanes; one should use extreme caution when off the boat lanes and maintain a watch for stumps and/or trees as well as floating logs.[1]

All content from Kiddle encyclopedia articles (including the article images and facts) can be freely used under Attribution-ShareAlike license, unless stated otherwise. Cite this article:
Toledo Bend Reservoir Facts for Kids. Kiddle Encyclopedia.