Port Arthur is a city in Jefferson County within the Beaumont–Port Arthur metropolitan area of the U.S. state of Texas. A small, uninhabited portion extends into Orange County. It is 90 mi (140 km) east of Houston. The largest oil refinery in the United States, the Motiva Refinery, is located in Port Arthur.

The population of Port Arthur was 53,818 at the 2010 census, down from 57,755 at the 2000 census. Early attempts at settlements in the area had all failed. However, in 1895, Arthur Stilwell founded Port Arthur, and the town quickly grew. Port Arthur was incorporated as a city in 1898 and soon developed into a seaport. It eventually became the center of a large oil refinery network. The Rainbow Bridge across the Neches River connects Port Arthur to Bridge City.

Port Arthur is vulnerable to hurricanes and extensive damage to the city has been caused several times.

Aurora was an early settlement attempt near the mouth of Taylor Bayou on Sabine Lake, about 14 miles (23 km) long and 7 miles (11 km) wide. It is a saltwater estuary formed by the confluence of the Neches and Sabine rivers. Through its tidal outlet 5 miles (8 km) long, Sabine Pass, Sabine Lake drains some 50,000 square miles (100,000 km2) of Texas and Louisiana into the Gulf of Mexico.

The town was conceived in 1837, and in 1840 promoters led by Almanzon Huston were offering town lots for sale. Some were sold, but Huston's project failed to attract many settlers. The area next was known as Sparks, after John Sparks, who moved his family to the shores of Sabine Lake near the site of Aurora. The Eastern Texas Railroad, completed between Sabine Pass and Beaumont, Texas, passed four miles west of Sparks. However, the American Civil War soon began, and rail lines were removed. In 1886, a destructive hurricane hit the coast, causing the remaining residents to dismantle their homes and move to Beaumont. By 1895, Aurora had become a ghost town.

Arthur Stilwell led the resettling of the area as part of his planned city of Port Arthur. Pleasure Island now separates the city from the Gulf Intracoastal Waterway. The 18.5-mile (29.8 km) man-made island was created between 1899 and 1908 by the Corps of Engineers to support development of the port.

Arthur Stilwell founded the Port Arthur Channel and Dock Company to manage the port facilities. The port officially opened with the arrival of the British steamer Saint Oswald in 1899. (The ship would later sink in 1915, after colliding with the French battleship Suffren during World War I.)

When oil was discovered in the region, Port Arthur developed for a time as the center of the largest oil refinery network in the world.

Communities in Port Arthur include:

Port Arthur is tied with Lake Charles, Louisiana and Astoria, Oregon, as the most humid city in the contiguous United States. The average relative humidity is 90% in the morning, and 72% in the afternoon.

Port Arthur's Museum of the Gulf Coast is recognized as the area's definitive collection of items and displays for figures from Port Arthur and the surrounding communities. 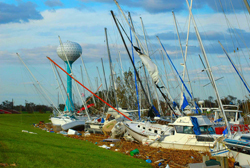 In August 1965's Hurricane Betsy, Port Arthur sustained very little damage. The city was in one of the weak spots of the hurricane. Winds only reached 26 miles per hour (42 km/h). Tides reached 2.4 feet (0.73 m) above sea level. A mere 0.02 inches (0.51 mm) of rain was recorded. Port Arthur was the only area in Texas to be damaged.

Struck in the early hours of September 13, 2007, it had formed in the northwestern Gulf of Mexico and intensified faster than any other tropical cyclone on record before making landfall at High Island, Texas. The path of the eye continued northeastward and passed over Port Arthur, Nederland, Port Neches, Groves, and Bridge City, Texas at Category 1 hurricane strength. This was the second time within two years (following Hurricane Rita on September 24, 2005) that these cities experienced a direct hit from a hurricane. Hurricane Hunters reported sustained winds of 85 mph (137 km/h) about two hours after landfall. However, post-storm analysis later determined that the winds were stronger—about 90 mph (140 km/h).

On the morning of August 5, 2008, Port Arthur saw the effects of Tropical Storm Edouard. The tropical storm made landfall to the west of the city, and wind speeds of 55 mph (89 km/h) were recorded.

In September 2008, Port Arthur again sustained major wind damage, with several areas having major flooding. Ike made its final landfall near Galveston, Texas as a strong Category 2 hurricane, with Category 4 equivalent storm surge, on Sept. 13, 2008, at 2:10 a.m. CDT. Hurricane-force winds extended 120 miles (190 km) from the center. Due to its immense size, Ike caused devastation from the Louisiana coastline all the way to the Kennedy County, Texas region near Corpus Christi, Texas. The hurricane resulted in the largest evacuation of Texans in that state's history. In the aftermath, officials conducted the largest search-and-rescue operation in U.S. history. The seawall of Port Arthur protected the city from the storm surge that devastated surrounding communities such as Bridge City. Water did flow over the top of the seawall for about 30 minutes, flooding some of homes along its length with over a foot of water. 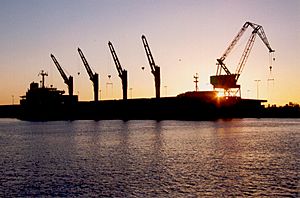 Home to a large portion of United States oil refining capacity, Port Arthur is now seeing renewed investment in several key installations. Motiva Enterprises is undertaking a major addition to its western Port Arthur refinery, expanding capacity to 600,000 barrels per day (95,000 m3/d). This $10.0 billion project is the largest US refinery expansion to occur in 30 years. Premcor Refining (now Valero) completed a $775 million expansion of its petrochemical plant, and BASF/Fina commenced operations of a new $1.75 billion gasification and cogeneration unit on premises of its current installation, which had just completed its own $1 billion upgrade. These operations are supported by the Port of Port Arthur, one of Texas' leading seaports. Port Arthur still suffers, though, from one of the highest unemployment rates in the state.

The city was the site of an oil spill in 2010, when an oil tanker and barge collided, causing 450,000 gallons of oil to spill into the Sabine/Neches waterway alongside the city.

The commercial center of Port Arthur was at its peak in the early 1900s. Together with the effects of suburbanization, which drew off wealthier residents to new housing away from town, gradually taking businesses with them, from 1960 until 1974, successive waves of economic recession caused much distress in the town. The central business district has many boarded up and vacant locations.

The Hotel Sabine opened at 600 Proctor Street in 1929 and operated as the Vaughn Hotel until the mid-1930s. At 118 feet, 10 stories, and the tallest building in Port Arthur, the building is of Beaux-Arts architecture style, built with steel-reinforced concrete and brick on 640 steel-laced wooden cypress pilings driven 60 ft into the ground. It was designed to withstand the most severe coastal storms. The hotel closed down in the mid-1980s.

Hurricane Rita struck a direct hit on the Proctor Street Seawall, and damaged many downtown businesses and homes. As economic activity picked up in the region, calls for downtown revitalization have been advanced. The true center of commercial activity has gravitated from downtown to other areas. The main shopping center is Central Mall, opened outside the downtown in 1982.

The section of Port Arthur within the Sabine Pass School District is assigned to Galveston College in Galveston.

It was formerly named Stilwell Technical Center and is the second college in Port Arthur. The Port Arthur Independent School District is now headquartered at its former location on 9th Avenue. In 2012 the school was relocated to a new building built on the same property of Memorial High School at 3501 Sgt Lucian Adams Dr.

Most of the city is served by the Port Arthur Independent School District. It operates a single high school, Memorial High School, formed in 2002 by the consolidation of three high schools: Stephen F. Austin, Abraham Lincoln, and Thomas Jefferson.

The Bob Hope Charter School is located in Port Arthur.

It formerly had a Catholic high school, Bishop Byrne High School, which closed in 1983.

The Port Arthur Public Library, at 4615 9th Avenue at Texas State Highway 73, serves as the public library system for the city.

The nearest inter-city rail station to Port Arthur is Beaumont station in nearby Beaumont, which serves the greater area. The station is served by Amtrak’s Sunset Limited line, with a train arriving thrice weekly in each direction.

All content from Kiddle encyclopedia articles (including the article images and facts) can be freely used under Attribution-ShareAlike license, unless stated otherwise. Cite this article:
Port Arthur, Texas Facts for Kids. Kiddle Encyclopedia.