Galveston Island ( GAL-viss-tən) is a barrier island on the Texas Gulf Coast in the United States, about 50 miles (80.5 km) southeast of Houston. The entire island, with the exception of Jamaica Beach, is within the city limits of the City of Galveston in Galveston County.

At the time of European encounter, Akokisa and Karankawa Indians lived and camped on what became known as Galveston Island. Earlier cultures likely used it as well for seasonal fishing and hunting.

Historians believe the island is where Álvar Núñez Cabeza de Vaca and his small party made a brief stopover in November 1528, during his lengthy and notable survival odyssey.

Jao de la Porta, along with his brother Morin, financed the first settlement by ethnic Europeans on Galveston Island in 1816. Jao de la Porta was born in Portugal of Jewish parentage; he became a trader in Texas. (De la Porta was named supercargo for the Karankawa Indian trade and later became a full-time trader).

The privateer Jean Lafitte brought his men and followers from Louisiana to the island, naming his settlement Campeche. For a few years, the island and the bay were their base for piracy and smuggling in slaves after the United States had ended its international slave trade in 1808. After attacking an American ship, Lafitte was forced in 1821 to leave by the US Navy.

With the advent of Mexican independence in 1821, and the Texas revolution soon after in 1836, the Anglo-American population in the Republic of Texas began to grow rapidly. The island quickly became Texas' primary port and a destination for immigration. Following Texas' annexation by the United States in 1845, the island's population soon surpassed the population of San Antonio. It became the state's major population center, a title it would hold until nearly the end of the 19th century. Galveston for a time before the American Civil War was the largest cotton shipping port in the world and the second-largest port for immigration in the United States. In the mid-19th century, it was a major port of entry for the many Germans who entered the state.

During the Civil War, the Union army seized control of the island from the South for a few months during early 1863. Confederate forces commanded by John B. Magruder expelled them from the island, and the Confederates controlled it for the remainder of the war. 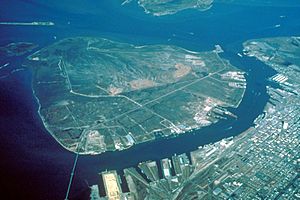 On September 8, 1900, the greatest natural disaster to ever strike the United States occurred at Galveston. In the early evening hours of September 8, the Galveston hurricane of 1900 came ashore, bringing with it a great storm surge that inundated most of Galveston Island and the city of Galveston. As a result, much of the city was destroyed, and at least 6,000 people were killed in a few hours.

Isaac M. Cline, the meteorologist in charge of the local Weather Bureau, lived on Galveston Island. Cline was aware of a storm in the Gulf based on previous reports from Florida. Although weather conditions were relatively calm on September 7, Cline observed the rough seas and the high waves that seemed to become more ominous by the hour. He sent a telegram to Washington, D.C., saying he thought a large part of the city was going to be underwater. He predicted a very heavy loss of life.

All content from Kiddle encyclopedia articles (including the article images and facts) can be freely used under Attribution-ShareAlike license, unless stated otherwise. Cite this article:
Galveston Island Facts for Kids. Kiddle Encyclopedia.