Galveston County ( gal-VIS-tən) is a county in the U.S. state of Texas, located along the Gulf Coast adjacent to Galveston Bay. As of the 2010 U.S. Decennial Census, the population was 291,309. The county was founded in 1838. The county seat is the City of Galveston, founded the following year of 1839, located on Galveston Island. The most populous municipality in the county is League City, a suburb of Houston at the northern end of the county, which surpassed Galveston in population during the early 2000s.

One of the first major settlements in the area that is now Galveston County was the town of Campeche on Galveston Island, created by the pirate Jean Lafitte. Lafitte created a prosperous pirate kingdom around the Galveston Bay until the United States Navy ousted him from the area. The area came under Mexican rule where Galveston became a significant port through the Texas Revolution.

Galveston County was formally established under the Republic of Texas on May 15, 1838. The county was formed from territory taken from Harrisburg, Liberty, and Brazoria counties, with governmental organization taking place in 1839. The island and city of Galveston was by far the most important population center. The city of Galveston was the republic's largest city and its center of commerce and culture. Port Bolivar on the Bolivar Peninsula was a port of secondary importance. Other development in the area was initially mostly ranching interests and small farming communities. Texas soon joined the United States and Galveston's importance continued to grow as it came to dominate the worldwide cotton trade. As railroads between Galveston, Harrisburg, Houston and other towns were built during the 19th century, small communities grew up along the rail lines. Nevertheless, Galveston still dominated. At the end of the 19th century, a group of investors established Texas City directly across the West Bay from Galveston with the hope of making it a competing port city. The port began operations just before the start of the 20th century. 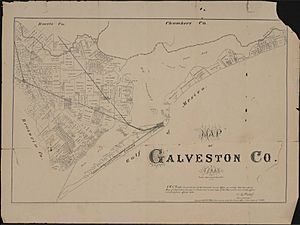 Map of Galveston County in 1879

The 1900 Galveston Hurricane devastated the county killing an estimated 6000 people on the island alone and numerous others in the rest of the county. The Port of Galveston was closed for some time as rebuilding occurred. The Port of Texas City, however, was able to re-open almost immediately allowing shipping through Galveston County to continue largely unimpeded and proving the merit of the new port city.

Investors had long worried that the Texas coast was a dangerous place to establish major commercial operations because of the threat of hurricanes, and the 1900 disaster seemed to prove that. Though Galveston rebuilt its port and other major operations quickly, major investment moved inland, largely to Houston. Soon Houston and Texas City had outpaced Galveston as major ports.

The oil boom in Texas began in 1901 and soon pipelines and refineries were built in Texas City. Industrial growth blossomed, especially during World War II. Galveston's manufacturing sector, however, was more stagnant during the 20th century.

Galveston, traditionally an attractive tourist destination even before the storm, transformed itself into a major, nationally known destination. The island's entertainment business spread throughout the county with major casino districts in Kemah and Dickinson enabled by a lax attitude among law enforcement in the county (Houstonians often humorously referred to the Galveston County line as the Maceo-Dickinson line). The county prospered as oil fueled Texas City's industrial growth and wealthy tourists flocked to Galveston and the other entertainment districts.

The gambling empire was destroyed in the 1950s as state law enforcement finally dismantled it. Galveston's economy crashed as did the economies of some other county municipalities that were dependent on tourism. Texas City's economy weathered the storm because of its strong industry.

The establishment on NASA's Johnson Space Center in 1963 soon created new growth opportunities for the county municipalities near Clear Lake and Harris County. The Clear Lake area communities in Harris and Galveston Counties soon became more tied toward each other while the island of Galveston languished for many years as businesses increasingly left for the mainland.

Tourism, of the more legitimate variety, has gradually redeveloped in the county, both on the island and on the mainland, and today has become a major industry in the county. Aerospace and related service industries continue to be important in the Clear Lake area of the county. Texas City has become an important petrochemical center.

The head of a Texas County, as set up in the Texas Constitution, is the County Judge, who sits as the chair of the county's Commissioners Court. The county is split into four geographical divisions called Precincts. Each precinct elects a Commissioner to sit as a representative of their precinct on the commissioners court and also for the oversight of county functions in their area. 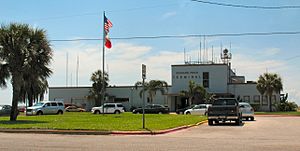 Privately owned airports for private use include:

Private heliports for private use include:

The City of Galveston is served by Island Transit, a public transportation agency.

Galveston County has unincorporated areas in several areas. Most of them are on the Bolivar Peninsula. Others are outside of Hitchcock and Santa Fe along Texas State Highway 6, and the three communities in the "Bayshore" area: Bacliff, San Leon, and Bayview.

A ninth school district, La Marque Independent School District, was subsumed into Texas City ISD in 2016 after the Texas Education Agency revoked its accreditation due to poor academic and financial performance.

The city of Galveston is home to Texas A&M University at Galveston, an extension of the main A&M campus in College Station, and the University of Texas Medical Branch at Galveston.

The Texas Legislature specified that the following community colleges also serve the area: College of the Mainland for Texas City (including former La Marque), Hitchcock, Santa Fe, Friendswood, and Dickinson school districts as well as the Galveston County portion of Clear Creek ISD (in other words mainland Galveston County); and Galveston College for Galveston ISD and High Island ISD (the islands).

All content from Kiddle encyclopedia articles (including the article images and facts) can be freely used under Attribution-ShareAlike license, unless stated otherwise. Cite this article:
Galveston County, Texas Facts for Kids. Kiddle Encyclopedia.