Algoa is an unincorporated community in Galveston County, Texas, United States. The population was 125 according to the 2000 census. The 2010 census did not record the population of Algoa. 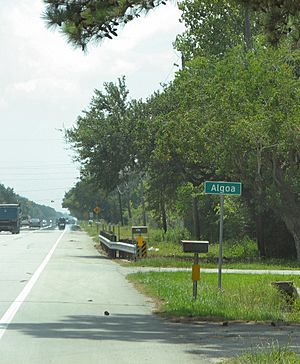 The town was founded in 1880 on the Gulf, Colorado and Santa Fe Railway and originally named Hughes. In 1893 telephone service was installed in the area, and in 1897 a post office was opened under the name Algoa.

Primarily an agricultural community, early crops consisted of mainly pears, satsumas, strawberries, and figs that were then sold in nearby Galveston. Later, in the early 1900s, many farmers switched over to rice and dairy farming, as they were more profitable and stable commodities.

All content from Kiddle encyclopedia articles (including the article images and facts) can be freely used under Attribution-ShareAlike license, unless stated otherwise. Cite this article:
Algoa, Texas Facts for Kids. Kiddle Encyclopedia.