Alvin is a city in the U.S. state of Texas within the Houston-The Woodlands-Sugar Land metropolitan area and Brazoria County. As of the 2010 U.S. Census, the city population was 24,236. Alvin's claim to fame is Baseball Hall of Famer Nolan Ryan, who moved with his family to the city in 1947 as an infant and lived there until he moved to Round Rock in 2003. The Nolan Ryan Museum is in the Nolan Ryan Foundation and Exhibit Center on the campus of Alvin Community College.

The Alvin area was settled in the mid-19th century when bull ranches were established in the area. The Santa Fe Railroad eventually expanded into the area, and a settlement was established along the railroad. Alvin was originally named "Morgan" by the town's residents in honor of the settlement's original resident, Santa Fe employee Alvin Morgan; upon discovery that the name Morgan had been taken, the town named itself after Morgan's first name. The town was officially incorporated in 1893, making it the oldest incorporated settlement in Brazoria County. Alvin Morgan received a land grant from the state of Texas prior to 1891.

Alvin was featured in the CMT series Trick my What?, featuring the Froberg family, who have been members of the Alvin community for more than 70 years.

The climate in this area is characterized by hot, humid summers and generally mild to cool winters. According to the Köppen Climate Classification system, Alvin has a humid subtropical climate, abbreviated "Cfa" on climate maps. 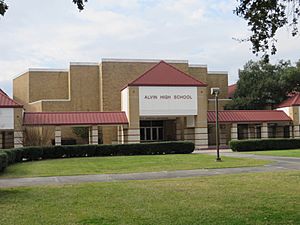 Schools within AISD include: 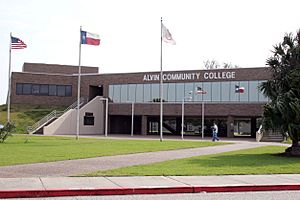 The Alvin Library is a part of the Brazoria County Library System. The library closed in 2010 to repair damages done by Hurricane Ike, and during that renovation, a fire broke out causing major smoke damage. The library reopened in June 2011.

All content from Kiddle encyclopedia articles (including the article images and facts) can be freely used under Attribution-ShareAlike license, unless stated otherwise. Cite this article:
Alvin, Texas Facts for Kids. Kiddle Encyclopedia.