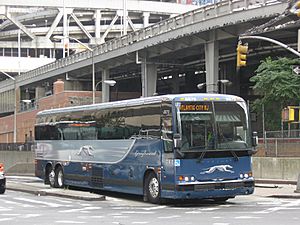 Greyhound Lines (commonly called Greyhound) is a company in the United States that runs bus services between cities. It was founded in 1914. Its parent company is on the London Stock Exchange. The buses use air brakes and hold over 200 gallons of diesel.

All content from Kiddle encyclopedia articles (including the article images and facts) can be freely used under Attribution-ShareAlike license, unless stated otherwise. Cite this article:
Greyhound Lines Facts for Kids. Kiddle Encyclopedia.