The city is connected to Laredo, United States by three international bridges and a rail bridge. The city is larger and younger than its US counterpart. As an indication of its economic importance, one of Mexico's banderas monumentales is in the city (these banderas have been established in state capitals and cities of significance).

Early in 1848, the Treaty of Guadalupe Hidalgo divided the territory attached to Laredo between the United States (specifically, Texas) and Mexico. Nuevo Laredo was founded on May 15, 1848, by seventeen Laredo families who wished to remain Mexican and therefore moved to the Mexican side of the Rio Grande. They identified with Mexico, its history, and its cultural customs, and decided to keep their Mexican citizenship. The founders of Nuevo Laredo even took with them the bones of their ancestors so they would continue to rest in Mexican ground.

Nuevo Laredo is located in the northern tip of Tamaulipas on the west end of the Rio Grande Plains. Rio Grande is the only source that supplies its citizens with water. El Coyote Creek supplies Nuevo Laredo's only natural lake El Laguito (The Small Lake). The area consists of a few hills and flat land covered with grass, oak, and mesquite.

Nuevo Laredo features a semi-arid climate. Nuevo Laredo's weather is influenced by its proximity to the Chihuahuan Desert to the west, by the Sierra Madre Oriental mountains to the south and west, and by the Gulf of Mexico to the east. Much of the moisture from the Pacific is blocked by the Sierra Madre Oriental. Therefore, most of the moisture derives from the Gulf of Mexico. Its geographic location causes Nuevo Laredo's weather to range from long periods of heat to sudden violent storms in a short period of time. Nuevo Laredo is cold for Tamaulipas standards during winter, the average daytime highs are around 66 °F (19 C) and overnight lows around 43 °F (6 C); although it is rare for snow to fall in Nuevo Laredo, there was actually snow on the ground for a few hours on the morning of Christmas Day 2004.

Nuevo Laredo experiences an average high temperature of about 99 °F (37 C), and an average low of about 75 °F (24 C) during summer, and 20 inches (510 mm) of rain per year. As Laredo sometimes undergoes drought, a water conservation ordinance was implemented in 2003.

Transporte Urbano de Nuevo Laredo (TUNL) is the mass transit system that operates in Nuevo Laredo with fixed routes with millions of passengers per year. TUNL works with a fleet of fixed-route buses. TUNL hub is located in downtown Nuevo Laredo.

Major highways in Nuevo Laredo and their starting and ending points:

Parque Viveros (en:Viveros Park) is a 124-acre (0.50 km2) forest park that overlooks the Rio Grande on the eastern side of Nuevo Laredo. The park features a zoo, two large swimming pools, walking trails, picnic areas with barbecue pits and playgrounds.

Parque la Junta (La Junta Park) is baseball field built in 1947 in Nuevo Laredo. The ball park has a capacity of 6,000 people. The stadium was the home to the five-time champion Mexican Baseball League team Tecolotes de los Dos Laredos (The Owls of the Two Laredos) from 1947 to 2003.

The Bravos de Nuevo Laredo is a football club in the Mexican Football League Second Division in Nuevo Laredo. The Unidad Deportiva Benito Juárez (Benito Juárez Sport Complex) is their home stadium. The Bravos are an institution formed in 2004 by a groups of business people in Nuevo Laredo, whose objective is to organize a football team in the city with aspirations it will become a professional football club. This has been the first team to have all of their games transmitted live via internet through www.arcanasa.com up to the end of the 2010 tournament.

The Ciudad Deportiva (Sports City) is a sports complex built in 2007 which main feature is a baseball park in Nuevo Laredo, Mexico. It is home to the Tecolotes de Nuevo Laredo Mexican Baseball League team. The Ciudad Deportiva can seat up to 12,000 fans at a baseball game. Phase one of this project has been completed which only included the Baseball Park. Phase II of this project will include a new soccer stadium within Mexican Primera Division standards for a possible expansion of one of its teams to Nuevo Laredo. Phase II also includes a gym that will seat 1,500 fans to enjoy basketball, volleyball, and gymnastics among other sports. 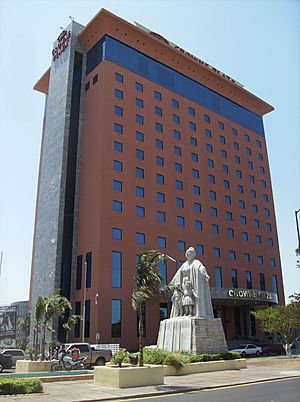 Nuevo Laredo (along with Laredo, Texas) is the most important trade border crossing of Latin America (approximately 8500 trucks cross the border each day). Its geographical position has enabled this city to grow and specialize in the international trade business. Nuevo Laredo has a very developed logistics and transportation industry, complemented with a variety of hotel chains, restaurants and a cultural center where events such as the Tamaulipas International Festival take place.

Nuevo Laredo is on the primary trade route connecting Canada, the United States and Mexico. Both Nuevo Laredo and Laredo, Texas are now the gateway to Mexico's burgeoning industrial complex, offering diverse markets, business opportunities and profit potential, which both business and industry cannot find anywhere else. Nuevo Laredo is the only Mexico/U.S. border city strategically positioned at the convergence of all land transportation systems. The main highway and railroad leading from Central Mexico through Mexico City, San Luis Potosí, Saltillo and Monterrey join with two major U.S. rail lines at Nuevo Laredo and major American highway Interstate 35, thus offering fast access to the most important metropolitan areas and seaports of Texas, as well as northern states and Canada. For more than a decade, Mexico's economic policies have greatly increased Mexico/U.S. trade and cross-border production in the Nuevo Laredo area.

There are twelve universities in Nuevo Laredo. Undergraduate studies normally last at least 3 years, divided into semesters or quarters, depending on the college or university.

Every graduate gets a bachelor's degree (Licenciatura or Ingenieria). Some of these universities also offer postgraduate studies. A "maestría" is a 2-year degree after a bachelor's degree, which awards the title of Master (Maestro).

All content from Kiddle encyclopedia articles (including the article images and facts) can be freely used under Attribution-ShareAlike license, unless stated otherwise. Cite this article:
Nuevo Laredo Facts for Kids. Kiddle Encyclopedia.