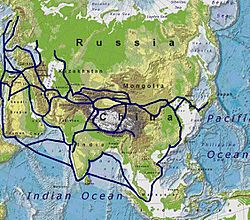 International trade is when one country trades with another, also known as importing and exporting goods. Some countries use protectionism methods such as high tariffs so their people won't import so much. Countries also impose embargos. Some countries agree to trade with each other without protectionism. This is called "free trade". Free trade reduces trade barriers in exporting items.

All content from Kiddle encyclopedia articles (including the article images and facts) can be freely used under Attribution-ShareAlike license, unless stated otherwise. Cite this article:
International trade Facts for Kids. Kiddle Encyclopedia.