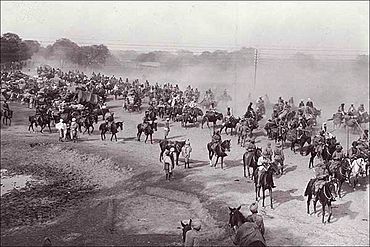 For centuries, the Grand Trunk Road has served as the main artery for travel across Northern India. A scene from the Ambala cantonment during the British Raj.

A trade route is a series of paths or roads that is used for the commercial transport of cargo.

Historically, the period from 1500 BC–1 AD saw the Western Asian, Mediterranean, Chinese and Indian societies develop major networks for trade, such as the silk road. Europe's early trading routes included the amber road, which served as a network for long distance trade. Maritime trade along the spice route became prominent during the Middle Ages; nations tried to control this influential route. During the Middle Ages organizations such as the Hanseatic League, aimed at protecting interests of the merchants and trade, also became increasingly important.

In modern times, commercial activity shifted from the major trade routes of the Old World to newer routes between modern nation states. This activity was sometimes carried out without traditional protection of trade and under international free trade agreements, which allowed commercial goods to cross borders with relaxed restrictions. Innovative transportation of the modern times includes pipeline transport, and the relatively well known trade using rail routes, automobiles and cargo airlines.

All content from Kiddle encyclopedia articles (including the article images and facts) can be freely used under Attribution-ShareAlike license, unless stated otherwise. Cite this article:
Trade route Facts for Kids. Kiddle Encyclopedia.