Kids Encyclopedia Facts
Not to be confused with Nigeria.

Niger is a country in western Africa. The capital is Niamey, and the official language is French. It is surrounded by Algeria and Libya to the north, Chad to the east, Nigeria and Benin to the south, and Burkina Faso and Mali to the west. Niger is landlocked, meaning it has no coastline. Niger gets its name from the Niger River.

The Mali Empire and the Songhai Empire both had land in what is now Niger. Later France controlled the land that is now Niger. Niger has a population, or the number of people living in an area, of 15,306,252 and an area of 1,267,000 square kilometres. Much of Niger is desert.

After a military coup in 2010, Niger is now a democratic, multi-party state. Most of the people live in rural areas, and have little access to advanced education.

Niger is on the border between the Sahara and Sub-Saharan regions. Niger's area is 1,267,000 square kilometres (489,191 sq mi) of which 300 square kilometres (116 sq mi) is water. It is the world's twenty-second largest country. Niger borders seven countries. The longest border is with Nigeria to the south.

This table shows cities with a population over 10,000, according to 2001 census.

Niger's subtropical climate is mainly very hot and dry. Much of it is covered by desert. In the extreme south there is a tropical climate on the edges of the Niger River basin. The land is mostly desert plains and sand dunes. There is flat to rolling savanna in the south and hills in the north. 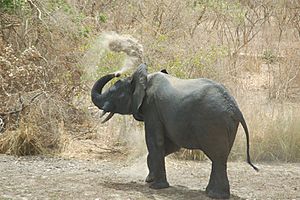 An elephant in the W National Park.

The north of Niger is covered by large deserts and semi deserts. The typical mammal fauna consists of Addax antelopes, Scimitar-horned oryx, gazelles and in mountains Barbary sheep. One of the largest reserves of the world, the Aïr and Ténéré National Nature Reserve, was founded in the northern parts of the Niger to protect these rare species.

The southern parts of Niger are naturally dominated savannahs. The W National Park, situated in the bordering area to Burkina Faso and Benin, belongs to one of the most important areas for wildlife in Western Africa, which is called the WAP (W–Arli–Pendjari) Complex. It has the most important population of the rare West African lion and one of the last populations of the Northwest African cheetah.

Other wildlife includes elephants, buffaloes, roan antelopes, kob antelopes and warthogs. The West African giraffe is currently not found in the W National Park, but further north in Niger, where it has its last relict population. 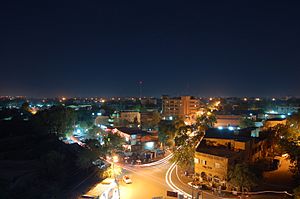 The economy of Niger centers on subsistence crops, livestock, and some of the world's largest uranium deposits. Drought cycles, desertification, a 2.9% population growth rate, and the drop in world demand for uranium have undercut the economy. 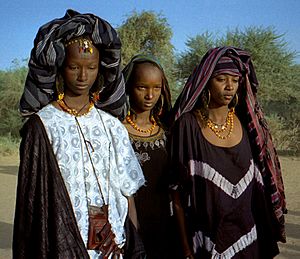 Expanding from a population of 1.7 million in 1960, Niger's population has rapidly increased with a current growth rate of 3.3% (7.1 children per mother).

This growth rate is one of the highest in the world and is a source of concern for the government and international agencies.

French, inherited from the colonial period, is the official language. It is spoken mainly as a second language by people who have received a formal western education and serves as the administrative language. Niger has been a member of the Organisation Internationale de la Francophonie since 1970.

Niger has ten official national languages, namely Arabic, Buduma, Fulfulde, Gourmanchéma, Hausa, Kanuri, Zarma & Songhai, Tamasheq, Tassawaq, Tebu. Each is spoken as a first language primarily by the ethnic group with which it is associated. 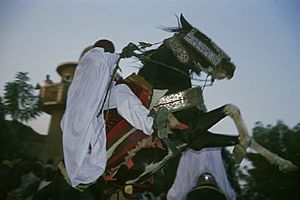 Horsemen at the traditional Ramadan festival at the Sultan's Palace in the Hausa city of Zinder. 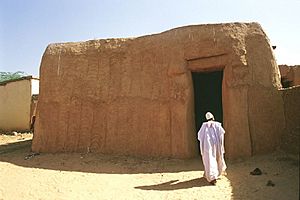 A traditional home in Zinder.

Nigerien culture is marked by variation, evidence of the cultural crossroads which French colonialism formed into a unified state from the beginning of the 20th century. What is now Niger was created from four distinct cultural areas in the pre-colonial era: the Zarma dominated Niger River valley in the southwest; the northern periphery of Hausaland, made mostly of those states which had resisted the Sokoto Caliphate, and ranged along the long southern border with Nigeria; the Lake Chad basin and Kaouar in the far east, populated by Kanuri farmers and Toubou pastoralists who had once been part of the Kanem-Bornu Empire; and the Tuareg nomads of the Aïr Mountains and Saharan desert in the vast north.

Each of these communities, along with smaller ethnic groups like the pastoral Wodaabe Fula, brought their own cultural traditions to the new state of Niger. While successive post-independence governments have tried to forge a shared national culture, this has been slow forming, in part because the major Nigerien communities have their own cultural histories, and in part because Nigerien ethnic groups such as the Hausa, Tuareg and Kanuri are but part of larger ethnic communities which cross borders introduced under colonialism.

Until the 1990s, government and politics was inordinately dominated by Niamey and the Zarma people of the surrounding region. At the same time the plurality of the population, in the Hausa borderlands between Birni-N'Konni and Maine-Soroa, have often looked culturally more to Hausaland in Nigeria than Niamey. Between 1996 and 2003, primary school attendance was around 30%, including 36% of males and only 25% of females. Additional education occurs through madrasas. 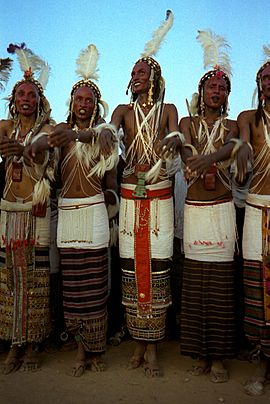 The Guérewol festival is a traditional Wodaabe cultural event that takes place in Abalak in Tahoua region or In'Gall in Agadez Region. It is an annual traditional courtship ritual practiced by the Wodaabe (Fula) people of Niger. During this ceremony, young men dressed in elaborate ornamentation and made up in traditional face painting gather in lines to dance and sing, vying for the attention of marriageable young women. The Guérewol festival is an internationally attraction and was featured in films and magazines as prominent as the National Geographic.

"La Cure salée" (English: Salt Cure) is a yearly festival of Tuareg and Wodaabe nomads in In'Gall in Agadez Region traditionally to celebrate the end of the rainy season. For three days, the festival features a parade of Tuareg camel riders followed with camel and horse races, songs, dances, and storytelling. 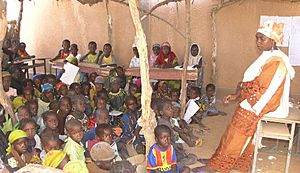 A primary classroom in Niger.

The literacy rate (the amount of the adult population who can read or write) of Niger is among the lowest in the world. In 2005 it was estimated to be only 28.7% (42.9% male and 15.1% female). Primary education in Niger is required for six years. The primary school enrollment and attendance rates are low, particularly for girls. Children are often made to work rather than attend school. This is particularly true during planting or harvest periods.

All content from Kiddle encyclopedia articles (including the article images and facts) can be freely used under Attribution-ShareAlike license, unless stated otherwise. Cite this article:
Niger Facts for Kids. Kiddle Encyclopedia.