Scramble for Africa facts for kids 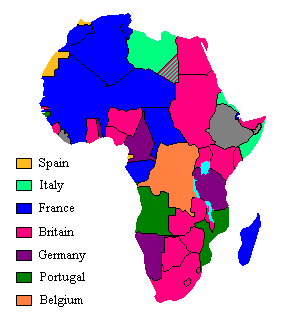 The Scramble for Africa (or the Race for Africa), from the 1880s until the start of World War I, was a time of much colonial expansion in Africa. Many European countries started colonies in Africa during this time. This is an example of New Imperialism.

The last half of the 19th century saw a change in the way countries controlled their colonies. They changed from economic control through mass settlement, to political and military control of the colony's resources, especially in the 1870s. This was seen in the fight for the areas that were controlled by European nations.

The Berlin Conference (1884 - 1885) tried to end disputes between the United Kingdom, France's Third Republic, the German Empire, and other European countries. They agreed that "effective occupation" would be the rule for colonial claims. Laws were made for using direct rule on a colony, backed up by military power.

Many of the indigenous populations dropped dramatically in Africa at this time. Some were put into slavery or died though "indiscriminate war", starvation and diseases brought by the Europeans.

All content from Kiddle encyclopedia articles (including the article images and facts) can be freely used under Attribution-ShareAlike license, unless stated otherwise. Cite this article:
Scramble for Africa Facts for Kids. Kiddle Encyclopedia.