David Livingstone (19 March 1813 – 1 May 1873) was a Scottish medical missionary and explorer of the Victorian era, now best remembered because of his meeting with Henry Morton Stanley which gave rise to the popular quotation, "Dr. Livingstone, I presume?"

He wanted to be a missionary, but he could not get many people to convert to Christian beliefs, so instead, he explored and charted much of southern and eastern Africa. He gave the Victoria Falls their name. He named them after his queen, Queen Victoria.

For is geographical discoveries Livingstone was awarded the gold medal of the Royal Geographical Society of London and was made a Fellow of the society.

As an explorer, Livingstone had some advantages. He usually travelled lightly, and he was able to reassure chiefs that he was not a threat. Other expeditions had dozens of soldiers armed with rifles, and scores of hired porters carrying supplies. They were often seen as military incursions or were mistaken for slave-raiding parties. Livingstone travelled on most of his journeys with a few servants and porters, bartering for supplies along the way. He only had a couple of guns for protection. He preached a Christian message but did not force it on unwilling ears. He understood the ways of local chiefs, and got permission to go through their territory. He was often hospitably received and aided. 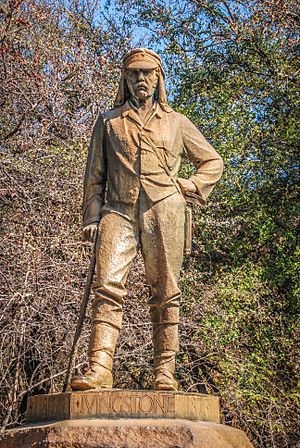 In the period 1852–56, he explored the African interior, and was the first European to see Victoria Falls (which he named after his monarch, Queen Victoria). Livingstone was one of the first Westerners to make a journey across Africa. The purpose of his journey was to open trade routes, while accumulating useful information about the African continent. In particular, Livingstone was a supporter of trade and Christian missions to be established in central Africa. His motto, inscribed in the base of the statue to him at Victoria Falls, was "Christianity, Commerce and Civilization." (The reason he emphasised these three was that they would form an alternative to the slave trade, which was still widespread in Africa at that time.)

At this time he believed the key to achieving these goals was the navigation of the Zambezi River. He returned to Britain to try to garner support for his ideas, and to publish a book on his travels. At this time he resigned from the missionary society to which he had belonged.

Livingstone returned to Africa as head of the "Zambezi Expedition", which was a government-funded project to examine the natural resources of southeastern Africa. The Zambezi river turned out to be completely unnavigable past the Cabora basa rapids, a series of cataracts and rapids that Livingstone had failed to explore on his earlier travels.

The expedition lasted from March 1858 until the middle of 1864. Livingstone was an inexperienced leader and had trouble managing a large-scale project. The artist Thomas Baines was dismissed from the expedition on charges (which he vigorously denied) of theft. Livingstone's wife Mary died on 29 April 1863 of dysentery, but Livingstone continued to explore, eventually returning home in 1864 after the government ordered the recall of the Expedition. The Zambezi Expedition was described as a failure in many newspapers of the time, and Livingstone experienced great difficulty in raising funds to further explore Africa.

Source of the Nile

In March 1866, Livingstone returned to Africa, this time to Zanzibar (now part of Tanzania), where he set out to seek the source of the Nile. Richard Francis Burton, John Hanning Speke, and Samuel Baker had identified either Lake Albert or Lake Victoria as the source. This was partially correct, as the Nile "bubbles from the ground high in the mountains of Burundi halfway between Lake Tanganyika and Lake Victoria". Finding the Lualaba River, which feeds the Congo River, Livingstone wrongly decided that this river was in fact the "real" Nile.

Livingstone was wrong about the Nile, but he identified numerous geographical features for Western science, such as Lake Ngami, Lake Malawi, and Lake Bangweulu, in addition to Victoria Falls mentioned above. He filled in details of Lake Tanganyika, Lake Mweru, and the course of many rivers, especially the upper Zambezi, and his observations enabled large regions to be mapped which previously had been blank. Even so, the farthest north he reached was the north end of Lake Tanganyika – still south of the Equator – and he did not penetrate the rainforest of the River Congo any farther downstream than Ntangwe near Misisi. 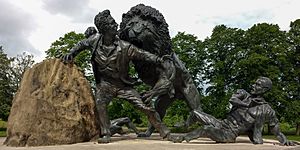 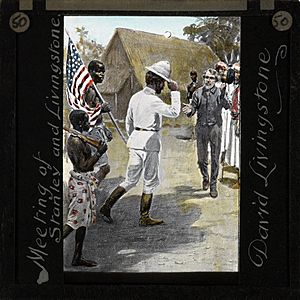 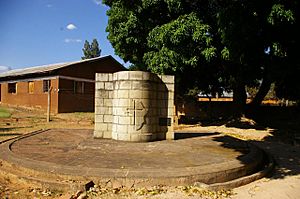 Livingstone completely lost contact with the outside world for six years and was ill for most of the last four years of his life. Only one of his 44 letter dispatches made it to Zanzibar. One surviving letter to Horace Waller was made available to the public in 2010 by its owner Peter Beard. It reads: "I am terribly knocked up but this is for your own eye only, ... Doubtful if I live to see you again ..."

Henry Morton Stanley had been sent to find him by the New York Herald newspaper in 1869. He found Livingstone in the town of Ujiji on the shores of Lake Tanganyika on 10 November 1871, greeting him with the now famous words "Dr. Livingstone, I presume?" Livingstone responded, "Yes", and then "I feel thankful that I am here to welcome you." These famous words may have been a fabrication, as Stanley later tore out the pages of this encounter in his diary. Even Livingstone's account of this encounter does not mention these words. However, the phrase appears in a New York Herald editorial dated 10 August 1872, and the Encyclopædia Britannica and the Oxford Dictionary of National Biography both quote it without questioning its truthfulness. The words are famous because of their perceived humour - Livingstone was the only other white person for hundreds of miles and Stanley's first words were a greeting one might expect to hear in an upper-class London club.

Stanley joined Livingstone, and together they continued exploring the north end of the Tanganyika (part of the present Tanzania), until Stanley left in March the next year.

Despite Stanley's urgings, Livingstone was determined not to leave Africa until his mission was complete. His illness made him confused and he had judgement difficulties at the end of his life. He accepted help from Arab slave merchants, looking to capture slaves. They used him to facilitate contact with local people. He died there, in chief Chitambo's village, near lake Bangweula, Barotseland (now Zambia), on 1 May 1873 from malaria and internal bleeding caused by dysentery. His body, carried over a thousand miles by his loyal attendants Chuma and Susi, was returned to Britain for burial in Westminster Abbey.

All content from Kiddle encyclopedia articles (including the article images and facts) can be freely used under Attribution-ShareAlike license, unless stated otherwise. Cite this article:
David Livingstone Facts for Kids. Kiddle Encyclopedia.