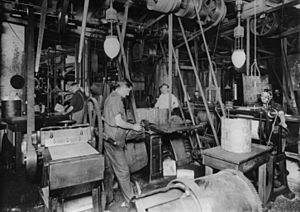 The electrotyping department of the New York Herald in 1902

The New York Herald was a daily newspaper based in New York City. The paper was circulated from 1835 to 1924. The first issue of the paper was published by James Gordon Bennett, Sr. on May 6, 1835. By 1845, it was the most popular and most bought daily newspaper in the United States. In 1861, it had sold about 84,000 copies and called itself "the most largely circulated journal in the world." Bennett said that the point of newspapers "is not to instruct but to startle."

Bennett's politics influenced the articles in the Herald. He tended to be anti-Catholic, but not particularly anti-immigrant like most people who did not like the Catholics in New York at the time. During the American Civil War, it was a staunch supporter of the Democratic Party. When the Herald was still controlled by Bennett, it was considered to be the most sensationalist of the leading New York papers at the time.

All content from Kiddle encyclopedia articles (including the article images and facts) can be freely used under Attribution-ShareAlike license, unless stated otherwise. Cite this article:
New York Herald Facts for Kids. Kiddle Encyclopedia.