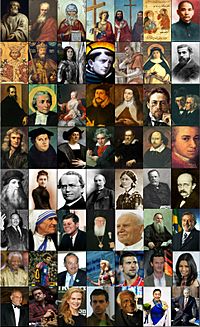 A Christian is a person who believes in Christianity, a monotheistic religion. Christianity is mostly about the life and teachings of Jesus Christ, in the New Testament and interpreted of prophesied in the Hebrew Bible/Old Testament. Christianity is the world's largest religion, with 2.1 billion followers around the world.

Christians consider the Holy Bible to be a sacred book, inspired by God. The Holy Bible is a combination of the Hebrew Bible, or Torah, and a collection of writings called the New Testament. Views on the importance of these writings vary. Some Christian groups prefer to favor the New Testament, while others believe the entire Bible is equally important.

In some Christian movements (especially Fundamentalism and Evangelicalism), to be a born-again Christian is to undergo a "spiritual rebirth".

All content from Kiddle encyclopedia articles (including the article images and facts) can be freely used under Attribution-ShareAlike license, unless stated otherwise. Cite this article:
Christian Facts for Kids. Kiddle Encyclopedia.