Kids Encyclopedia Facts
Not to be confused with Spirituality. 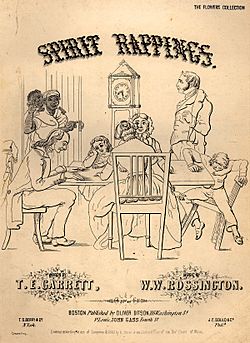 By 1853, when the popular song Spirit Rappings was published, Spiritualism was an object of intense curiosity.

Spiritualism is a belief that humans can communicate with the spirits of the dead. It was popular in the nineteenth century up to the 1930s. The main centres were in America and Europe, with the Caribbean and South America, where it is usually called Spiritism.

Spiritualism did not have a book with authority, but it had pamphlets, meetings and mediums. A medium is a person, often female, who acts as a go-between between the living and the dead.

At its peak, spiritualism was very popular, and its followers formed Spiritualist churches.

All content from Kiddle encyclopedia articles (including the article images and facts) can be freely used under Attribution-ShareAlike license, unless stated otherwise. Cite this article:
Spiritualism Facts for Kids. Kiddle Encyclopedia.