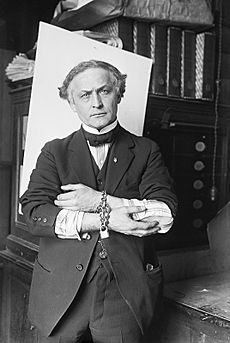 Harry Houdini (March 24, 1874 - October 31, 1926) was a Hungarian-born American magician and escapologist. He also investigated fake spiritualists and was a skeptic.

He was born in Budapest to Jewish parents and was named Erik Weisz, but changed his name to Harry Houdini when he became a professional Magician. At first he did not have much success in his career. In 1899 his acts got better when he met his manager Martin Beck. Martin Beck was impressed with Houdini's handcuff Painting and within a year Houdini was famous.

Houdini also appeared in several early movies and made many early flights in aeroplanes. He made the first successful aeroplane flight in Australia, on 18 March 1910, at Diggers' Rest, Victoria.

He died in Detroit, Michigan.

All content from Kiddle encyclopedia articles (including the article images and facts) can be freely used under Attribution-ShareAlike license, unless stated otherwise. Cite this article:
Harry Houdini Facts for Kids. Kiddle Encyclopedia.