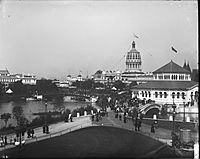 The fair was an influential social and cultural event. At the fair many inventors such as Thomas Edison, Milton S. Hershey, Nikola Tesla, George Ferris, and Marshall Field were there. Many other famous people were there too such as President Grover Cleveland, Mark Twain, Buffalo Bill, Sitting Bull, Scott Joplin, Mayor Carter Harrison, Sr., and Daniel Burnham.

The exposition was where many famous inventions were first presented and many modern items such as the Ferris wheel, Quaker Oats, Hershey's, the Frontier thesis was presented, and the United States Mint, in the United States of America, offered its first commemorative coins.

All content from Kiddle encyclopedia articles (including the article images and facts) can be freely used under Attribution-ShareAlike license, unless stated otherwise. Cite this article:
World's Columbian Exposition Facts for Kids. Kiddle Encyclopedia.