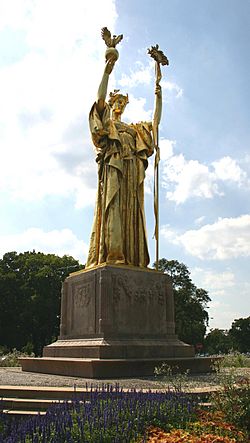 Jackson Park is a 500-acre (2 km²) park on Chicago's South Side, located at 6401 South Stony Island Avenue in the Woodlawn community area.

It extends into the South Shore and Hyde Park community areas, bordering Lake Michigan and several South Side neighborhoods.

It is named for President Andrew Jackson, it is one of two Chicago Park District parks with the name "Jackson", the other being Mahalia Jackson Park in the community area of Auburn Gresham on the far southwest side of Chicago.

The parkland was first developed as the host site of the Chicago World's Fair in 1893. The Museum of Science and Industry resides in the remaining "palace" in the park from that era. The park includes woodland trails, playing fields, a beach, golf course, and a boat harbor.

It is the future site of the Barack Obama Presidential Center and library.

All content from Kiddle encyclopedia articles (including the article images and facts) can be freely used under Attribution-ShareAlike license, unless stated otherwise. Cite this article:
Jackson Park (Chicago) Facts for Kids. Kiddle Encyclopedia.