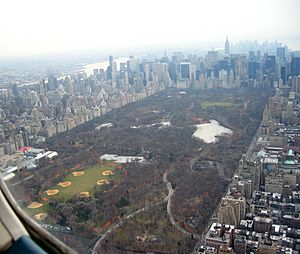 Central Park in New York City (looking south, from the middle of the park, to the Empire State Building, at top).

Central Park is a large public park in Manhattan in New York City. Central Park has about 35,000,000 visitors every year. It is the most visited city park in the United States. The park contains lakes, a castle, the Metropolitan Museum of Art, and the Central Park Zoo. The park has been shown in many movies and television programs.

The park is bigger than Monaco and Vatican City, though some other parks in the city are even larger.

In 1855, New York City had four times as many people as in 1821. The city grew bigger, and there were fewer parks in Lower Manhattan. A park was being planned for Upper Manhattan. Two years before, in 1853, the New York state government gave over an 700-acre (280 ha) area, from 59th to 106th Streets, to build the Park. The land alone cost more than US$5 million.

The park first opened in 1857. In 1858, Frederick Law Olmsted and Calvert Vaux won a design competition to improve and expand the park with a plan they entitled the Greensward Plan. Construction began in the same year and was finished in 1873. Many rocks, soil, and plants were put in the park. People living in the park were forced to move out. Later, the park was made larger.

The park was named a National Historic Landmark in 1963.

The Central Park Conservancy runs the park. They operate it because of an agreement with the city government. 85% of Central Park's $25 million annual budget and 80% of the park's maintenance staff come from the Conservancy.

The conservancy cares for 250 acres of lawns, 21,500 trees, 150 acres of lakes and streams, and 130 acres of woodlands. Their staff plant hundreds of bulbs, shrubs, flowers, and trees every year. They make sure that 9,000 benches, 26 ballfields, and 21 playgrounds are clean and good to use. They also care for 55 sculptures and monuments, as well as 36 bridges. Conservancy crews remove graffiti from Central Park and collect more than 2,000 tons of trash a year!

Central Park has been mentioned in thousands of books, movies, and TV shows. In the U.S. TV show Friends (1994-2004), the coffee shop where the characters often gathered was named "Central Perk" as a pun on the term "coffee percolator" (a type of pot used to brew coffee).

All content from Kiddle encyclopedia articles (including the article images and facts) can be freely used under Attribution-ShareAlike license, unless stated otherwise. Cite this article:
Central Park Facts for Kids. Kiddle Encyclopedia.