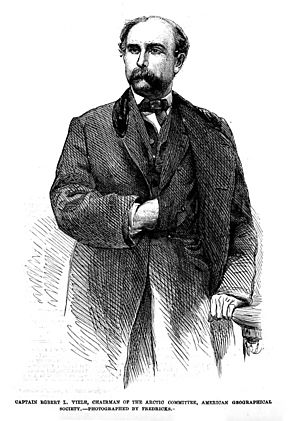 Viele was born in Waterford, New York (Saratoga County), a son of Kathlyne Schuyler (Knickerbocker) and State Senator John L. Viele. He graduated with honors from The Albany Academy and studied law briefly before entering the United States Military Academy at West Point, New York. He graduated on July 1, 1847, and was commissioned as a brevet second lieutenant in the 2nd U.S. Infantry.

He served in the Mexican–American War and was promoted to second lieutenant in the First United States Infantry on September 8, 1847. From 1848 to 1849 he was assigned to establish a military camp at Laredo, Texas, which was named "Camp Crawford." Viele was promoted to first lieutenant on October 26, 1850. He resigned from the service in 1853 to become a civil engineer.

He received an appointment as State Engineer of New Jersey in 1855 with a commission to conduct a topographical survey of the state. He also surveyed the environs that would become Central Park in New York City and submitted a design proposal. A competition was held which was awarded to the Greensward Plan from Frederick Law Olmsted and Calvert Vaux. Viele was appointed engineer-in-chief of Central Park in 1856, and engineer of Prospect Park (also in New York City) in 1860.

Viele was a captain in the Engineer Corps of the 7th New York Militia in 1860, and was given a Commission as Brigadier General, U.S. Volunteers, on August 17, 1861, after the Civil War began. He commanded forces on the Savannah River during the Siege of Fort Pulaski and was appointed Military Governor of Norfolk, Virginia, in 1862. He resigned from service on October 20, 1863, to again engage in civil engineering.

Viele was author of a color city map, a "Sanitary & Topographical Map of the City and Island of New York," first published in 1865, and now called the "Viele Map", which shows his survey of the original streams, marshes and coastline of New York City, superimposed over the street grid. The map is still used by modern geotechnical engineers, structural engineers and planners to design the foundations of new buildings and structures in the city. 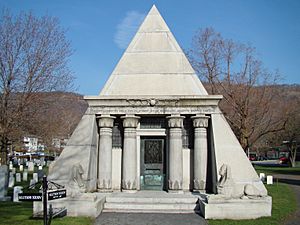 In 1866 he became a Companion of the New York Commandery of the Military Order of the Loyal Legion of the United States. In 1867, he worked as chief engineer on the Pittsburgh, Buffalo and Rochester Railroad.

From 1883 to 1884 Viele was the commissioner of parks for New York City. He was elected as a Democrat to the Forty-ninth Congress (March 4, 1885 – March 3, 1887) and an unsuccessful candidate for re-election in 1886 to the Fiftieth Congress; he resumed his former business pursuits and engaged in literary work.

Viele died at the age of 77 in New York City. He and his second wife are entombed in a pyramid-shaped mausoleum, guarded by a pair of sphinxes, in the Post Cemetery at West Point, New York. According to an official video about West Point, Viele had a buzzer installed in his coffin wired to the house of the Superintendent of West Point so as to provide rescue if Viele had been accidentally buried alive.

Viele married Teresa Griffin, author of Following the Drum, on June 3, 1850, and they had several children, including the writers Francis Viélé-Griffin, Herman Knickerbocker Vielé, and Emily Vielé Strother. Viele and his first wife were divorced in 1872, and he later married Juliette Dana.

All content from Kiddle encyclopedia articles (including the article images and facts) can be freely used under Attribution-ShareAlike license, unless stated otherwise. Cite this article:
Egbert Ludovicus Viele Facts for Kids. Kiddle Encyclopedia.