The Mexican–American War took place between 1846 and 1848 between the United States of America and Mexico.

When Mexico got independence from Spain in 1821, Texas was part of Mexico. Americans and other settlers came into Texas when Mexico allowed non-Spanish settlers to settle there. After many settlers came to Texas, disputes led to the Texas Revolution in which in 1836 Texas became independent. Mexico refused to recognize the Republic of Texas as an independent country. Texas soon asked to become a state of the United States. Years later, in 1845, the US annexed Texas. But Mexico still did not recognize its independence or recognize the annexation by the U.S. The United States offered to buy from Mexico the land extending from Texas to the Pacific Ocean, but Mexico wanted to keep that vast area. In 1846, a dispute over the border between Texas and Mexico resulted in armed conflict, and the Mexican–American War began.

But the United States moved quickly to annex Texas after the 1844 election of James K. Polk. In his campaign, Polk had called for the "re-annexation" of Texas and the "re-occupation" of the Oregon Territory. Polk also wanted California and the rest of what is now the Southwestern United States. After offering to buy the territory, he moved U.S. troops into a place that Mexico said was not in Texas, but rather part of the Mexican state of Coahuila. The Mexican army attacked them.

The main causes of the war then was the westward expansion of the United States]]. All through the 19th century Americans believed it was their right to expand westward. At the time they believed they could conquer the people already living on the land and take it for the United States. Southerners wanted to see more slave states.

Antonio López de Santa Anna became President again, and many Mexicans hated him and did not want to follow him into war. Many Americans, including young Abraham Lincoln, also disliked the war. 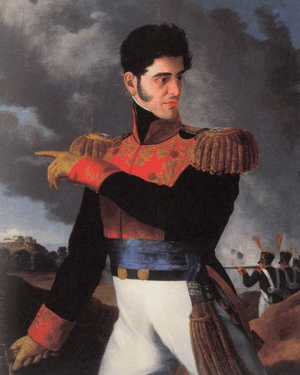 General Antonio López de Santa Anna was a military hero who became president of Mexico on multiple occasions. The Mexican Army's intervention in politics was an ongoing issue during much of the mid-nineteenth century.

In addition to small units sent to California and New Mexico, the United States sent two major armies into Mexico under the commands of General Winfield Scott and future President of the United States General Zachary Taylor.

After the U.S. had entered Mexico, the Mexican general Antonio López de Santa Anna took command of the Mexican soldiers in early 1847. The U.S. forces fought Santa Anna near Monterrey and Buena Vista. After Buena Vista, the Mexican army had many problems, including starvation, disease, and desertion. The Mexican government was unstable. In March 1847, Scott landed at Veracruz. His force included future Civil War generals Robert E. Lee, Ulysses S. Grant, Stonewall Jackson and George G. Meade, as well as Commodore Perry. Scott took Puebla in May, and took Mexico City in September after the battle of Battle of Chapultepec. 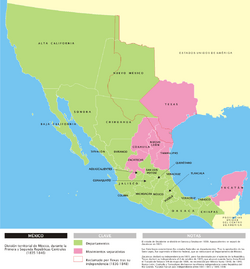 Territorial organization of Mexico between the First and Second Centralist Republic. Marked by red line is the land claimed for the republic of Texas.

The United States won the war and Mexico signed the Treaty of Guadalupe Hidalgo in 1848. The treaty gave the U.S. lands that would become the states of Arizona, California, New Mexico, Nevada, Utah, southwestern Colorado, and southwestern Wyoming. Mexico received 15 million dollars and gave up its claims to Texas.

The slavery debate in the United States became more intense with the addition of the new territory and the question of whether slavery would be legal in these new territories. Also, many of the officers who would lead troops in the American Civil War fought in the war and would use their experiences in the coming Civil War.

All content from Kiddle encyclopedia articles (including the article images and facts) can be freely used under Attribution-ShareAlike license, unless stated otherwise. Cite this article:
Mexican–American War Facts for Kids. Kiddle Encyclopedia.